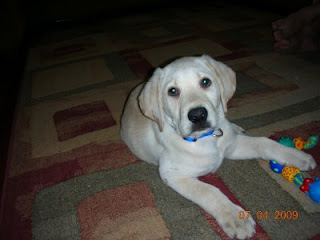 That friends is Sonny- our new Labrador Retriever puppy. After a decade and a half of being a consistently canine free family we went out on a limb and decided to get ourselves a dog. We decided for several reasons that a dog was just the thing to accompany us on our outdoor pursuits as well as having more personality than our aloof cats.
Of course, our son has wanted a dog for a couple of years now and has consistently asked for one about every 5 minutes. After talking to a bunch of our dog loving friends, it was quickly evident that Labs are the Alaska family dog of choice.
Huskys and Malamutes, while supremely developed for ridiculously cold weather require a level of exercise that is simply unbelievable. I wanted a dog- not a sled team. A friend and coworker has a Mastiff- I don't need (or want) a draft animal. Several acquaintances have minature type dogs- I've always regarded them as beanie babies that bark. A visit to the animal shelter revealed a couple of things- if you want a Husky, they have plenty and they are not the pup for a first time dog owner. If you want a purebred Lab, be prepared to open your wallet because they don't have any. In fact, no shelter in the state had any. In fact, they never have any.
In a couple of ways i looked at that as a good sign- folks with them must be keeping them. The hyper active Huskies- not so much apparently. At least that's a good sign with used cars...
A couple of calls around the state located a breeder a mere 350 miles away who had a suitable pup ready to go. It was a holiday weekend and the family was ready to camp. It appeared the stars were in alignment so away we went. The next day found us in Wasilla, Alaska smelling like wood smoke with me plunking down cash for a 11 week old puppy we were simply starstruck with. I didn't even notice when the governor resigned a mere 1/2 mile away. I barely noticed when he ate the seat out of our van. I've never met a more lovable animal than chewed everything in sight. Including your socks. While you're wearing them.
A few hours later it dawned on me- I'd just driven 700 miles and paid money for a DOG.
The best darn dog I've ever met- sometimes temporary insanity is a wonderful thing.
Posted by hodgeman at 7:20 AM

Have a great day.

I guess not too shabby considering I go 200 miles for groceries at times!

Wise move swerving the mastiff. they defiantly are an outdoor pet. It's those big ropes of egg white that they love to flick about! Yeeacchh!
Seriously good choice Labs are so good natured.
SBW

My current alpha female border collie was so cute and cuddly as a pup it took me a while to notice that she had decided to "improve" the checkering on a Mauser sporter (I'd stocked myself) that was leaning in a corner.

Best dog I ever have had but border's aren't for the faint of heart nor people that have lives that don't allow a dog along with at all times and they don't really settle down much to where you can really work with them until they're 2.5-3 and even then will test every limit and look for every loophole in regulations.

I was staying at my sisters once visiting and my dogs hop fences like they aren't even there but my sister's beagle mixes don't have that ability. My dogs solved that. They hopped out the fence to go look for stuff to hunt/chase and when the beagles didn't hop the fence too, they dug a beagle escape tunnel from OUTSIDE the fence. You could tell by the way the dirt was dug and in which direction it had gotten thrown in the digging. :-)

Labs are a lot easier breed if you don't mind throwing frisbees and tennis balls a LOT.

Sister, I guess got jealous of my strong willed dogs and now has a Hamilton Hound that CLIMBS TREES. When it gets hot she likes to hang out up in the the limb crotch in the shade of this particular tree about 20 feet in the air so she gets a nice breeze and a bird's eye view of the neighboring land too and I'm sure the smells are a bonus too for a hound.


Nobody to play with, nothing to chase....I'm gonna hang out in my "treehouse". She won't come down until she feels like it either :-)

Belatedly, congrats on your new pup! My boyfriend and I are still dogless, but I know one of these days, it'll happen. But boy will my kitty be pissed.