Success! In a different way. 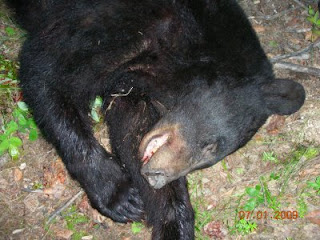 "Dad, how well do you know this guy? It's late and I hope he doesn't get pissed for showing up like this..."

I'd heard the sound of the truck pulling in the driveway moments before and was in the process of getting dressed in the twilight that passes for dark this time of year when I heard Evan (my bear partner's son, not my son also named Evan) express concern about knocking on the door of the darkened rural house that late at night. I looked at the clock- it was 11:00PM.

I went to the open second floor window and asked Dwight how it was going. He showed me a red palm and a big bright white smile in the dim gloom and said I needed to come down and check out the bear they'd taken just a half hour before. My wife muttered in a sleepy voice, "..better put on your old clothes...". She knew that when there's stuff to dress and butcher I'm a sucker to lend a helping hand.

What I found waiting was a beautiful dry sow (without cubs) of quite reasonable size in the back of the truck. "I needed a knife," explained Dwight, who had apparently forgotten all of his field dressing gear in my garage after our last foray together. They'd been hunting bear and fishing all week together on Evan's vacation prior to starting college in Texas and enjoying the Alaska wilderness together. On the night prior to Evan's departure the persistence of hitting the area we'd been seeing sign paid off handsomely when they spotted this lone sow feeding on a sandy river bottom at about 150 yds off a defunct logging trail.

A well placed bullet from the '06 broke both shoulders and put the bear on the ground preventing a harrowing follow up through the thick dark summer foliage. A quick follow on second shot (an insurance shot if you will) through the lung and heart area ensured a quick finish to the bear's struggle although a post mortem during field dressing proved that one entirely unnecessary. Bone fragments from the near shoulder had wreaked havoc through the boiler room and that bear was dead on it's feet but just hadn't succumbed to the inevitable. Dwight's second shot had rang out as soon as the sight picture settled back from recoil. What the heck, bullets are cheap and I'll buy a case of them before I follow another wounded bear through the dark tangles by choice. Been there. Done that. And it ain't any fun. My policy is shoot till they're down for good.

We wrestled the bear out of the truck and my wife took a few photographs including a stellar father/son shot that I intend to blow up and frame for Dwight as a gift. I'd love to post it here but out of respect for his privacy I'll digress. You'll have to take my word for it that its a great photograph that captures the spirit of hunting in Alaska perfectly. We pulled out the skinning and butchering gear and got to work taking great care to skin the bear carefully for making into a rug. I told Dwight,"You take the tricky parts (the head and paws) and I'll take the big parts." I'd much rather skin a bear's whole carcass than skin a single paw. It's time consuming, tricky and one wrong cut will result in a mount the looks goofy in the extreme.

We whet our knives and went to work on opposite sides of the bear, Dwight working with a scalpel to skin the delicate parts and myself with the large curved skinner my wife got me a few years back. Evan pulled and tugged and held tension on the hide. The warm bear skinned easily but it took several hours to complete the task. We wrapped the quarters in butcher paper and took them to my freezer for a quick chill before Dwight decides how to process it. At 2:00AM we pulled the tape to check the size and the bear squared 6'6". We lacked a scale but we guessed the bear had a live weight of about 300 pounds or so in her lean spring condition. Not a record book bear (you all know how I feel about that topic) but a beautiful trophy and some delicious meat for the table as well as a truly unforgettable memory for Evan.

Although the kill wasn't mine I celebrated Dwight's success as my hunting partner and was proud to participate in the harvest with him and his son. It was a special week as his son experienced Alaska and prepared for embarking on life on his own. Seeing the excitement on the young man's face as he pulled on the hide and learned how to skin a bear's skull from his Dad was better than pulling the trigger on my own this year. Congratulations you guys.
Posted by hodgeman at 9:45 PM