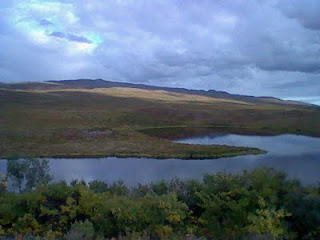 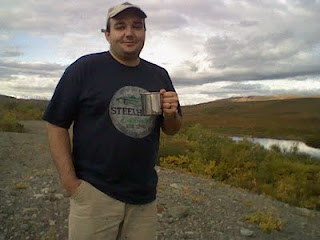 or pours over tracks and plants on hands and knees intrigued by the world around him and taking it all in.
I was also thankful for the times I had as a kid doing the same thing with my Dad and doubly thankful that pushing my own age I still feel the same awe and wonder despite the heavy burden of responsibility adulthood lays on us all.
I flipped the last of the coffee into the hissing embers and crawled into the worn sleeping bag, glad for sleep and warmth to come in the midst of heavy thoughts and the cooling wind.
Author's Note:here's a couple of photos Evan snapped with his Nintendo DS- our only camera at the moment.
Posted by hodgeman at 9:29 AM

Thank you for sharing your camping trip! Sounds like your little guy is going to like that kind of life. Better try to stay in shape so you can keep up with him! I had this same feeling today on a hike with my kids. Hard to believe how quickly they grow. Goes by like a flash.

Father and son times are great! Thanks for the story.

Ahh.. That's an awesome story and I'm sure it'll be a great memory for years to come!! :)

I may have quit the blogging thing but I am so glad that I am still checking on my favorites now and then which allowed me to catch this touching story about fatherhood. I know you once ran the hills of E. Tennessee so you can probably imagine the setting of me and my 6 year old son having a similar heart tugging time near norris lake. We saw white tail Deer instead of moose but most importantly I got the your the best dad line to that night. It may have been the best moment of my life. Good on you my brother from Alaska. keep being a good dad and I will keep reading about it.
your pal "The Envirocapitalist"

Hi. I have a blog at www.picturecamping.com where I feature people's posts about camping, and I would like to send my readers your way. Of course I would give you credit for quotes and would link back to your site.

Thanks for considering this,

Jean,
Feel free, let me know how to help.