First Foray of the Season... 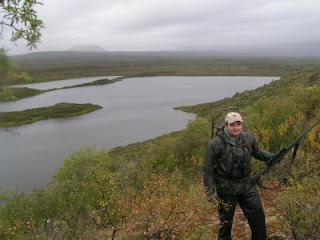 I sat and watched the rain pool up and trickle off the sleeve of my jacket and make its way down my pants leg and onto the toe of my boot. We were about 4500 feet above sea level and the skies were a variegated pattern of rain, hard rain and mist. I looked back up in the binoculars that I had perched on my pack frame as a makeshift rest and glanced back up on the distant hillside.
A few moments later I called out in a quiet voice- "Movement."
The day had started the previous evening, a Friday, when my frequent hunting partner called up and asked me just when I planned to unwrap myself from around the axle of work and family pressure and finally go hunting. After all, the season had already been open a whole week and I certainly wasn't getting it done. Several of my friends (darn lucky friends, or maybe unlucky) were already tagged out for the year.
"I don't know, sometime, maybe this weekend," I replied; barely looking up from the blueprints on my desk.
"How about tomorrow morning-5A.M.?" came his query. It was statement and question and social commentary all in one. "Anything you can't pawn off on one of your crew will surely wait till Monday," he added as a barb to firmly set the hook.
I was had and I knew it. "What did you have in mind?"
What he had in mind was a trip down the road to the Denali Highway. From there we would set off on a series of lakes and portages in his favorite new toy- an inflatable whitewater canoe- and search for caribou or perhaps a very lost moose wandering around on the high alpine lakes and tundra. The trip got off to a good start and we arrived on the lake shore launch at 0'dark hundred. Unfortunately, the moisture laden low pressure system arrived just about the time we got the raft inflated and in the water- a cold rain began to fall and the ceiling came right down on the nearby hills. 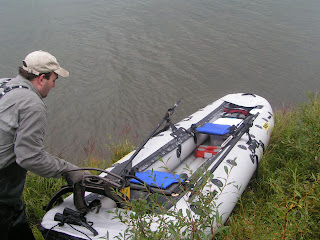 Undeterred, we launched the raft and made decent time to the first portage about a mile and a half from the ramp. The weather was worsening the entire time and in addition to the mist falling with the rain drops a cold wind started blowing down the lake channel making forward progress difficult in the raft. Inflatable white water rafts are good for a lot of things but rowing on a wind blown lake is not one of them; so we abandoned the raft at the far side and began an arduous climb through the alders looking for the summit hidden somewhere in the mist.
Finding a well worn trail on the summit of the pressure ridge we began picking our way slowly and quietly along the spine, using the technique for crossing tundra that the caribou themselves employ. There is often a narrow band of firm rock and gravel at the apex of these pressure ridges that makes for much easier travel than through the tussocks and marshes of the valleys.
Several hours and several miles of hunting along these ridges brought us to the crest of a tall hill where we could see the entire lake system and vast expanses of the surrounding mountainsides. The rain hadn't let up all day and we were both chilled as we discussed the vagaries of caribou migration and the unpredictable nature of these wide ranging animals. That's when we saw the distant movement. At first we were excited at the development as we watched the single animal a half mile distant turn into two then three. Something wasn't clicking right as we watched the faint, dark blobs romp around in circles on the mountainside. Then it dawned on me- caribou don't play and romp. Ever. Cross 50 miles of hellish tundra in a single day- sure. But I've never seen them display anything resembling wasted motion.
We decided to inves 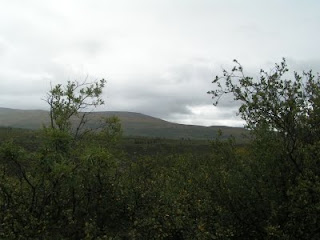 tigate further by crossing the valley floor and climbing the intervening ridge. That would bring us about a quarter of a mile from the forms and put us in perfect position to launch a stalk should we see something worth going after. After several long minutes of rushed quiet and scrambling through the soaked alders to the apex we quickly spotted what we were looking for. Our animal was none other than a large sow grizzly with her two nearly grown cubs. It was the cubs we had seen playing with each other and romping while the sow was busily snacking on blueberries by the mouthful. This was a great grizzly encounter- not close enough to spook the sow and the potential unpleasantness that may bring; but close enough to watch in total amusement through 10x binoculars. I tried a few photos through the binos with the predictable blurry worthless exposure.
After a half hour of watching, the bears began feeding further down the hillside; bringing them closer to our position. Neither of us were sure if the bears were aware of our presence or not; although the strong wind in our face probably kept all the scent behind us and our noise would have been masked as well. Discretion being the better part of valor we decided to back down the reverse side of the ridge and leave these three to their berry picking and playing. A rare treat for sure.
Working our way back through the maze of pressure ridges and gravel veins to our raft took a couple of leisurely hours. We stopped often to eat handfuls of rain washed blueberries that looked ready to pop and glassed frequently for caribou that for all we knew were eating white gravy on french fries somewhere in British Columbia.
The endless rain had put our resolve and equipment to a test. My waterproof boots had failed prior to noon and only my wool socks were keeping my soaked feet from freezing. Dwight's "hydrofleece" more resembled a sponge and served only to warm the water a little as it soaked through. His (formerly) remarkably light jacket must have held several gallons of water. I was happy to have real rain gear as I was mostly dry considering I'd spent hours thrashing through head high alders in a blowing rain. Our binoculars were rain soaked and had a variety of leaves stuck to the lenses. The walnut grip of Dwight's .44 had turned a sickly white from all the moisture and I was happy to have my fiberglass stocked and ceramic coated .300 instead of my pet .308. The stock would have never been the same after this trip. Wood stocked guns are a joy but this wouldn't be the place I'd want to enjoy it.
We discussed the (relative) success of the trip as we rowed the raft back into the main body of the lake, letting the big raft catch wind for the first free ride of the day. We had eaten handfuls of berries and had a great grizzly encounter. We had not seen a caribou over dozens of square miles and Dwight had missed a grouse three times with his .22 revolver. Nobody got hurt but we sure got wet. Very typical caribou hunting in my experience. We had a mile to drift through a lake filled with grayling and a couple of lines with white spinners. Maybe the trip wouldn't be a total loss after all.
More to come...
Posted by hodgeman at 5:35 PM

Waiting on the rest!
Albert

Beautiful! Glad you got unwrapped from the axle - it's imporant to resist that tyranny!