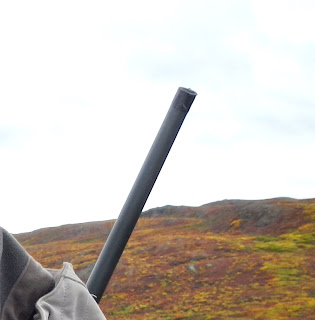 A sharp-eyed reader wrote to me after my last piece and asked what was wrong with my muzzle in the original of the above photo.

In short, the answer is "Nothing". That appendage on the end of my rifle barrel is good old electrical tape. "Why" you may ask?

The fix is easy. Take a 1.5" piece of electrical tape and put it over the muzzle. Take a 3" piece and wrap it around the barrel to secure the first piece in place. Now your rifle is protected from getting stuff in it you'd rather not have.

Years ago as a teen, I dropped my 30-30 while descending a small bluff. The rifle fell about 15' straight down and stuck itself stock up in the E. Tennessee red clay mud. The bore was hopelessly clogged with mud and every effort I made to remove it in the field was in vain. Hunt OVER.

Just last year I was hunting with a friend on a winter caribou hunt when he rolled his snow machine and (unbeknown to him) filled the barrel with snow. That snow melted from some heat source (snow machine, body heat we have no idea) and the melt water ran down into the action and refroze on the bolt face and chamber. A few hours later we spotted a wolf resting in a clearing- my partner attempted to chamber a round and couldn't close the bolt. It took a few minutes to diagnose the problem and even longer to try to fix it with a lighter. By the time the rifle was back in action the wolf was long gone.

In either of the above instances- firing the rifle with the obstructed bore could have been catastrophic. Firing your rifle with tape over the muzzle isn't dangerous- the escaping gas and bullet easily bursts through the layer of tape and it doesn't appreciable change the point of impact of the rifle. After firing you can unwrap the second piece of tape, remove the burst first piece and discard then tear the longer second piece in half and protect the muzzle again. As a bonus, the tape can also protect the rifle's crown from damage which will ruin your rifle's accuracy permanently until the ministrations of a gunsmith cure it and lighten your wallet in the process.

Tape. Simple fix to keep your rifle in action under trying conditions.
Posted by hodgeman at 11:52 PM

By "discard' I'm sure you meant 'put it in your pocket and take it home' I can't imagine you condoning littering!

@SBW- certainly not suggesting littering, it should go into a pocket or your pack and get hauled out or tossed into the campfire while you're roasting a fresh tenderloin!

With certain brands of electrical tape you can ball it up use it as a fire starter much the way an old bicycle inner tube does. Doesn't last as long but it can burn quite hot.

In 67-68, in a far warmer part of the world we used a 'device', one that guys on R&R were advised to use. It kept mud and dirt out pretty well, and you could fire through it. Can you guess.
Nice blog, reminds me of my years up there.
Mike