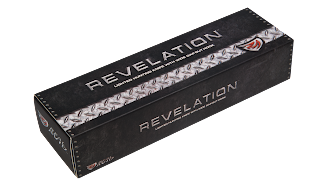 As you may have noticed by the little banner on the upper left, I am on field staff for a company called Real Avid. The company makes a selection of hunting and shooting accouterments. A few days after I signed the contract a neat little package arrived in the mail containing their signature product- the Revelation Knife with instructions to take it out and get it dirty. That I could do.

The following weekend I took my neighbor out on a caribou hunt and we were quite fortunate after a long day of stalking caribou and seeing them in the hundreds- to finally close the distance on a good sized cow. My neighbor made a stunningly skillful (or stunningly lucky) 309 yard neck shot and neatly dropped the caribou instantly into a pile. Turns out I'd get to try that knife out after all! 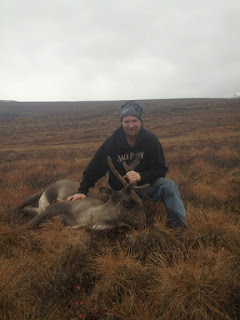 The knife has a couple of LEDs built into the handle that illuminates the cutting edge of the blade (hence the moniker- Revelation). Purpose built for those times when you drop an animal at the productive times at last light, it neatly solves the problem of putting some light on the task of field dressing your animal. I've done this task with a flashlight clenched in my teeth and while wearing a headlamp as well as by the beams of various vehicles- none are ideal since all methods leave a lot of shadows on your subject. Far from just a nuisance, wielding sharp knives in places you can't see can often result in whittling on your own digits- a bad deal. 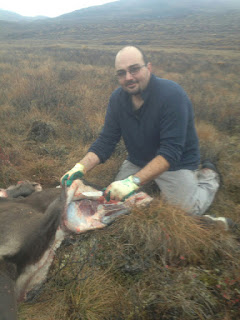 Since we'd dropped this caribou at 5:30 in the afternoon and had three hours until dark, it was unlikely that we'd be able to take advantage of the lights to their fullest but we'd give the rest of the knife a workout. Some initial impressions are the knife appeared well made for it's modest MSRP and while 440C stainless isn't my favorite blade steel, it is entirely up to the task of a hunting knife. It was also quite sharp out of the box and noticeably absent was the incredibly annoying "wire edge" so prevalent on a factory sharpened knife. Just a good working edge was there. The handle was made of some type of polymer with a slightly tacky feel that provided good grip- even wet or bloody. At the pommel was a small threaded plug that contained the battery pack for the light and on the scale side was a small button that turned the LEDs on and off. The sheath was a rather simple (and effective) pouch style made from nylon and plastic. 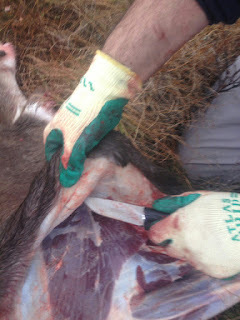 We easily made the initial incisions and after using a bone saw to cut through the sternum, activated the lights to make the often difficult cuts around the diaphragm. My partner was only slightly experienced so being able to see what he was doing was a real confidence booster. In just a few minutes he had the internal organs removed cleanly. At this point we started skinning the animal and the drop point blade made efficient work of the task and we quickly had an entire side complete. The blade easily separated the front quarter and we placed it in a game bag. We went to work on the rear quarter and the blade stood up to the often rigorous wrenching required to separate the ball joint without damage- I've broken two knives doing such work so it didn't pass without note. We filleted out the tenderloin and backstrap and we were ready to flip and repeat.

Despite the foul weather and high winds, after only about an hour or so we had the caribou broken down into two manageable bundles and ready to pack out the half mile or so to our boat. After butchering the entire caribou with little additional tooling except a bone saw, the edge remained sharp enough to butcher another one without resharpening. I generally think the ability to butcher one big game animal without retouching is quite sufficient and this one passed the test with flying colors. 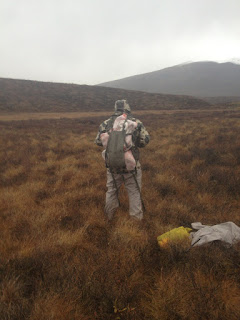 My only complaint with the knife (and I've shared the commentary with the makers) is that the black handled knife disappears easily in the field- I much prefer that sort of tool to be in a blaze orange color for easy location during use and to prevent loss...but that'll be a topic for my next post.

Per Real Avid- The Revelation knife is available at Wal-Mart, Dick's Sporting Goods, and (of course) the Real Avid website if you'd like one of your own. I would expect other retailers to pick it up in due course as well.

Being a dyed in the cordura rucksack nut, I thought i'd ask is that a Mystery Ranch load sling I see you using? and what packframe are you using it with?

Amusing story, the Load Sling I was going to swap with you has passed through another two owners and is now, shameful to admit this, back with me!

That is indeed a MR load sling on a MR NICE frame.... I managed to trada a guy out of a NICE 6500 with a load sling after ditching my Kuiu last year.

Love that pack and the load sling even more!