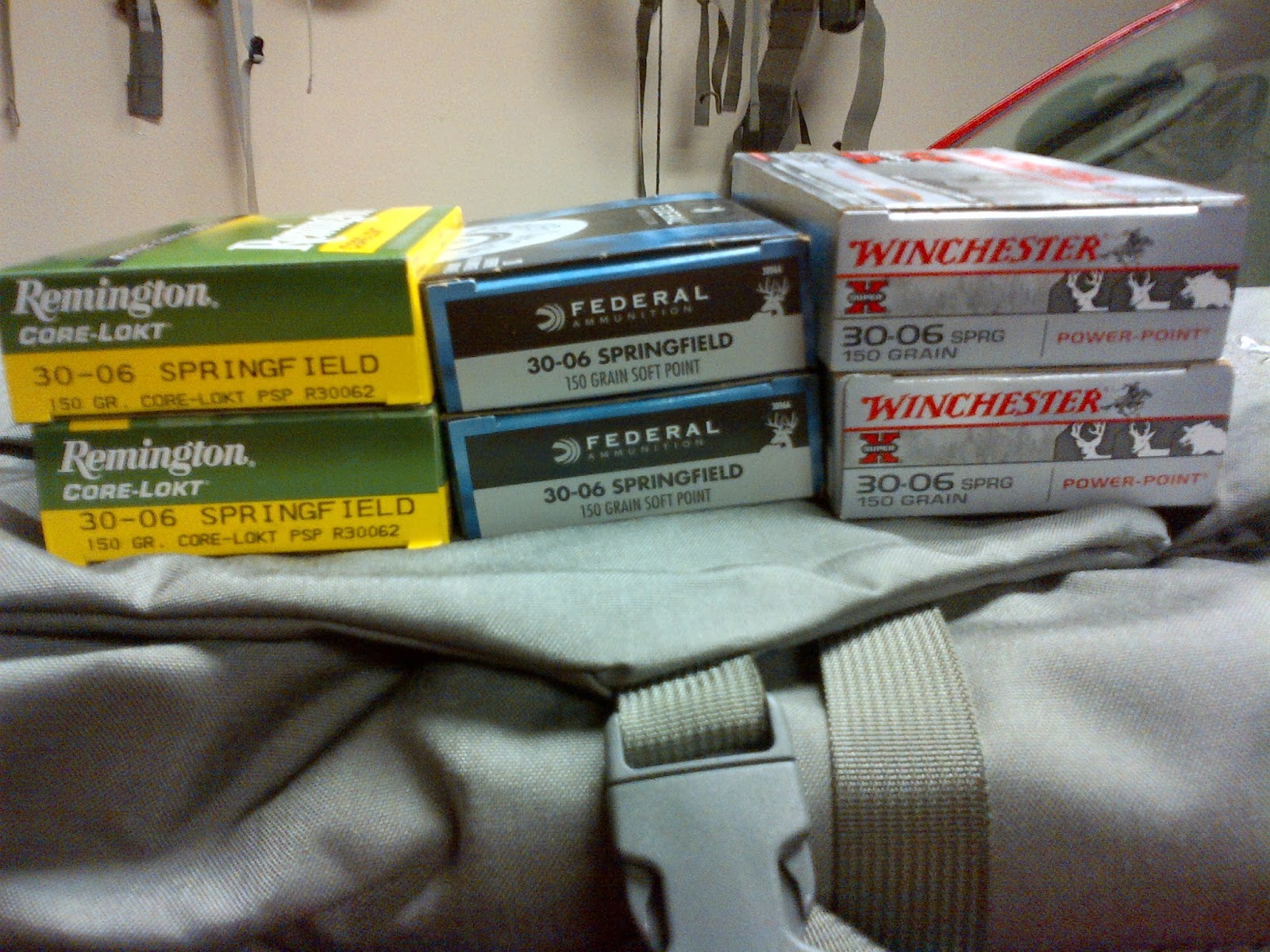 In the way back when of the dawn of the 20th century, smokeless gunpowder was making serious inroads into ammunition and all of the world's primary armies had made the transition. They made the transition the usual way- in stages. Simply adapting big chunks of lead on top of smokeless. The velocities that smokeless made possible were astounding and quickly outstripped lead's ability to hold together and not blast right past the barrel's rifling. Engineers made that transition quite early by applying a jacket of "Cupro-Nickel" to stand up to the barrel speeds. Not too long later they began to realize that the new speeds these rounds were capable of could result in arms capable of tremendous range- provided they did something about the bullet's shape. All of the early bullets were generally heavy for caliber and round nosed- not generally unlike sporting ammunition of the late nineteenth century- and had the ballistic coefficient of a brick. So the dawn of the 20th century saw something else gain widespread traction. The spitzer bullet. Long, tapered, wind bucking points made the bullet fly further, faster and with more accuracy. To make a civilian hunting bullet, some engineer somewhere just filled the point off to expose a little lead to the impact so the whole thing would mushroom like a flat nosed hunting cartridge. The expanding spitzer was born.

Not to go into a long discourse of military arms development, but it's curious that the '06's parent round, the .30-03 was introduced in 1903 with a 220gr. round nosed bullet. Essentially born too late since arms development was already favoring lighter, spitzer bullets at higher speeds. It didn't take long for Army brass to realize they were already behind the arms race in the days prior to WWI. So they modified the '03 case and the Springfield rifle to fire the 150gr bullet at a speed of 2700fps and change.

Early American sportsmen didn't exactly beat down the door to grab the new cartridge. America's hunting fields back then were largely lever action country and levers and early autos accounted for most of the game and game cartridge development until the next big thing. War. When WWI was over the landscape had changed dramatically. Millions of young men had trained and fired the '06 in combat and found the '06 would outrange their old 30-30 or .32 Special by what seemed like half a mile. The U.S. government did something else- they sold off the old stocks of war material for pennies on the dollar. In today's political environment we think it bizarre and somewhat unbelievable but the U.S. government sold hundreds of thousands of '03 Springfields and many millions of rounds of ammunition through the mail for darn near the price of shipping. And the '06's place in U.S. sporting arms was secured. It would be a fixture in sporting arms for the next century…right up to present day. As an aside, the widespread adoption of the '06 as the standard hunting cartridge for N.American game doomed several dozen very good cartridges to instant obscurity- .351 Winchester, .30 Newton, .32 Special, .300 Savage…none sold well after that. The fact the '06 performed well in the woods and was available for very moderate cost during the Great Depression gave it a real edge in the market. Even the vaunted .270 Winchester would get off to a slow start. "Does almost the same thing for twice the price", was how even the .270's biggest proponent put it…none other than Jack O'Connor.

So it's fitting that I start my look at the '06 where the cartridge was born- the 150gr bullet. In the 21st century with modern powder the case can propel that bullet to remarkable speeds and most companies load it to something between 2900 and 3000 feet per second. There are a lot of lighter bullets and heavier bullets available but I'd wager the 150 grain is likely the most common. It's available in many types- FMJ, "cup and core", bonded, monolithics, solids, tipped….virtually every type of bullet made is available as a .308" 150 grain. In the future I will  have an article that addresses each of these types so don't get bogged down in the verbage.

I rounded up a selection that I had on hand- Federal Power Shok, Remington Core-Lokt, and Winchester Power Point- and headed for the range. All of these rounds represent the "entry level" hunting cartridge, a plain Jane "cup and core"loaded to 2900 fps and a little change. I fired a couple of three shot groups with each and each grouped about the same out of the rifle and oddly enough- to about the same point of impact (an effect I didn't expect and I wouldn't count on it in your rifle). The average group was a respectably consistent 1.75". Felt recoil was mild after a decade of shooting decidedly more powerful rifles. While in today's hypersensitive accuracy environment a 1.75 MOA group seems out of place and not exactly newsworthy when you read of "sub MOA" every time you open a page. We would do well to remember that this ammo is manufactured in the millions of rounds annually and sells for just a little north of $20 a box. It is not advertised as a precision product and pretty well represents the plain "imitation vanilla" of the ammo available to us today. You could sure spend a lot more on ammo for your .30-06 smoke pole…but do you need to?

What could a hunter do with a 150 grain standard bullet out of an '06? Well, just about anything really. It wouldn't be my choice for elk or big moose and for darn sure not my choice for a brown bear, but most of the hunters in America are chasing just two species now- white tailed deer and feral hogs. In fact, I know several hunters who have spent their entire long hunting careers and never so much as fired a shot at anything other than a white-tail deer and the 150 grain bullet is pretty much perfect medicine for one and in the long history of the '06- bullet performance is pretty much perfect for the job as well. When it comes to wild hogs I can't pretend to have much experience there but many pretty savvy hog hunters go after them with either the equivalent or even less. Despite the propensity of the outdoors media to "over-dramatize" many things, I just can't see a two hundred pound hog needing more killing than this.

What about other stuff? Black bears are certainly not that heavily built nor that big and in most places they're hunted  the ranges tend to be short- I wouldn't feel under-gunned here despite hysterics that the word "bear" encourages. The 150 grain is right at home shooting for antelope with it's flat trajectory and mild recoil that encourages good shooting. It's also hard to imagine any sheep alive that wouldn't readily succumb to a 150 grain bullet. A really big bull caribou is the size of a middling elk and while the 150 grain wouldn't be my preferred cartridge for them, I've used it and it's on the right side of the margin. A very average sized caribou is much smaller though, about the size of a mule deer, and the cartridge would do (and has done) extremely well. Mountain goats tend to be, pound for pound, the toughest game animals in N.America- they also live in some very nasty country. Wounded goats also have the spiteful tendency to launch themselves down cliff faces and while the 150gr. is easily capable of killing a goat, I'd probably err on the side of "too much is just enough." I don't want to kill a goat, I want to flatten him. As I write this though a friend of mine's daughter is having a very nice goat scored for the book…and she shot it with an '06 with a 150gr. bullet.

In fact, if I were looking for just one load to hunt all Lower 48 species- the '06/150gr would be it. One of the things that makes the '06 "ballistic celery" is the fact that it's just so adequate for everything we hunt here at the ranges we normally hunt them at. In the modern age, we tend to have many thousands of marketing messages thrown at us- super tough premium bullets, shooting at extreme long range, screaming velocity, unrealistic accuracy reports- most of which have little bearing on what we've done with the '06 for over a hundred years.

Which is killing average game at average range with 150 grain cup and core bullets.

While we could stop the story here- a hunter armed with a decent rifle and a supply of 150 grain hunting bullets can in fact darn near do it all- we won't. There's a lot more to cover on the .30-06.

I'm partial to the 180gr, myself...but I recognize that it's more than I usually need. No such thing as too dead, though, and it allows me to go from whitetails and axis to big hogs and elk. It helps, though, that my poor old Savage really likes the 180s.