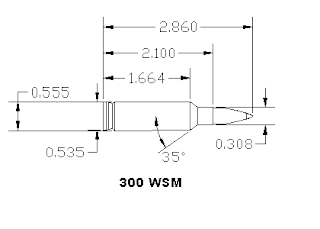 We've just seen the end of S.H.O.T., the Shooting Hunting and Outdoor Trade Show. In the U.S., this is the most likely venue for new product introductions from almost everyone in the industry. While I greeted the offerings this year with a giant yawn- consisting mostly of AR variants and pieces parts- this wasn't always the case.

Way back in 2001, the folks at Winchester introduced the .300 Winchester Short Magnum in the midst of what some folks have called the Second Magnum Craze. The introduction followed the typical Winchester playbook- great hype in a full court press of magazine articles and a marketing blitzkrieg. One could not open a sporting or shooting magazine without reading an article extolling the virtues of the "Short Magnum".

Most of it was pure baloney.

Claims of reduced recoil in the form of "reduced ejecta" sounded just science-y enough to be plausible. Claims of velocities exceeding the well established .300 Winchester Magnum were everywhere you looked. Hyper-ventilation over the joys of a shorter bolt throw were shouted from the heavens. We were treated to a plethora of dead critter photos in print, apparently only possible from the new cartridge.  In those days, Winchester was a behemoth in the industry and new guns and ammo sold pretty well.

It didn't take long for the ever-cynical shooting community to unleash its own torrent of hyperbole. I was told point blank by a savvy rifleman that the cartridge was doomed to obscurity and cash spent on such a rifle was practically flushed. Work with a chronograph soon revealed that Winchester's data had a bit of "blue sky" in it as well (not the first time for that one either) and most folks with production guns with 24" barrels were getting 2900 fps and a bit of change with the 180gr bullets, far short of the promised 3100 fps. Most folks who pulled the trigger on one got belted with enough recoil to make claims of "reduced recoil" sound like the complete rubbish it is. According to a number of Internet Bwanas, the rebated rim practically guaranteed your mauling at the paws of charismatic megafauna when your gun jammed. Some early rifle had feeding issues that did nothing to alleviate those concerns either.

In those days, you could log into your favorite forum or BBS (remember that!) and read pages of technical minutiae from both sides and when Winchester introduced their follow on family of short cartridges in .270, 7mm, and .325,  as well as Remington's competing "short mags".... things kinda went tilt. Suddenly the market had a glut of cartridges that all, pretty much, did the exact same thing.

What both sides of the debate missed was pretty much everything.

I came along to the .300WSM in 2006, when I (somewhat reluctantly) purchased a rifle I was in love with. My rifle was a lightweight.... a 6.5 pound rifle for carrying into high and rocky places.  I wanted something with enough oomph for the odd grizzly or moose and with enough reach for Dall sheep and caribou over open country. Ammo was fairly expensive compared to .30-06 fodder, but in all reality- most hunters just don't shoot their rifles all that much and with recoil numbers in the 25-29 foot pound range...don't really want to.

A string of dead critters later and the .300WSM did not disappoint. Since then, every big game animal I've taken with one exception has been with the cartridge. I've now had 3 of the WSM family and just recently purchased a Winchester 7WSM for eventual custom work. My favorite rifle shoots 180 grain bullets into 3/4" at 2925fps with boring regularity. None of the WSM rifles I've had exhibited feeding issues and every one of my acquaintances who have WSMs do not regret the purchase. They just happily head to the field and kill stuff.

While it may sound like I'm a fanboy, I'm not. The cartridge is, what it is- nothing less or more. A very effective cartridge that gets near .300 Win Magnum performance in a handy sized short action rifle. It's now 15 years old and pretty near ubiquitous on sporting good retailer's shelves and cataloged by almost everyone making guns and ammunition. I expect that it will not be teetering on obsolescence any time soon. It's not magic either- it's just a brass bottle for holding gunpowder and a pretty good one at that.

Do you have any experience with WSM cartridges and Remington rifles? Am considering a good deal on a used SPS stainless in the 300 WSM for a moose and bison rifle (I live next door in the Yukon) but have heard mixed reports on the feeding reliability in that chambering. I've been reading your blog for a year or so and you seem to have well informed and objective opinions.

(Mostly I hunt with a 308 and am looking for just enough extra power for bison. The 308 doesn't meet our legal minimum, and 30-06 is legal but marginal for that species, in my experience.)

Will- I've messed around with a couple of Remington rifles in WSM chambers. I didn't hunt with them but on the range they didn't exhibit any issues feeding the cases. Remington 700s tend to be good feeders in my experience with pretty forgiving geometry- they feed those giant RUM cases and that looks like a nightmare from a design standpoint.

The Model 7 (probably not what you're buying in an SPS) is a bit on the small side for a WSM, although they've attempted it a few times. No experience with them (they are kinda rare).

All of the feeding reliability issues that I heard about came from a single company (not Remington) and even after seeing several examples of that company's rifles on ranges and talking to numerous owners- never actually saw or heard of a feeding issue firsthand. There seems to be a lot of fluff out there about it without many actual experiences to back it up.

I'd purchase it without hesitation if you like the rifle but be warned- it can easily become your favorite rifle! Given how many rifles Remington has chambered in the WSM now- any feeding issue should be easily resolved by the factory or a gunsmith if it happens.

As an aside- I'm not sure of the Yukon but here the .300WSM shooting 200gr bullets makes the minimum easily for bison 2800fps is readily achieved and energy numbers are excellent..

If you don't have a 200gr bullet requirement like we do, stick with a good quality, controlled expansion 180gr. I've seen several moose taken with 180gr and the penetration was amazing. Bison shouldn't be a problem.

Thanks for popping by!
Hodge

Thanks for the thorough response!

I watched a friend take a medium sized bull bison with the 30-06 and 220 gr corelokts - a slow kill despite multiple (7 including a coup de Grace) solid hits at we'll under a hundred yards.

I'm in agreement that the magnum velocity with a lighter, tougher bullet would perform better than this though.

I don't have much experience with the 700s, but like that they come with a slightly shorter (13 3/8) LOP. Not so good for the resale value to cut a stock to fit if I'm not sure I want to keep it.

Thanks again for the advice,