The 7WSM.... An Unloved Cartridge Bargain. 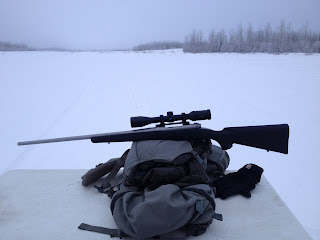 I must admit that in years past, I was never a fan of the 7mm bore. I had mostly .30 calibers and a couple of .270s. It was a prejudice that really wasn't grounded in anything...just a notion floating around in my brain. I've written a couple times now about the 7-08 and how we've found good success with it. I've also written a couple of times about inexpensive rifles that just perform far beyond what their meager prices should warrant.  I've also written about the innate Scot's thriftiness that I've inherited... little did I know that all three of those things would come together in a rifle.

I was perusing one of the community yard sale boards and came across a rifle. A Winchester Stainless Classic. The asking price wasn't out of line, but it was chambered in the red headed stepchild of the WSM family...the 7WSM. Same concept and case as the rest of the WSMs...basically a 7mm Remington Mag in a short action- 140gr@3200, 150gr@3100 and 160gr@3000fps. On the ammunition market, the 7WSM has proven about as popular as the clap.

I've truly enjoyed the .300WSM but the7WSM in this rifle simply left me cold. I just ignored it.

After seeing the rifle hang around for a bit and the owner drop the price a couple of times...I thought that the rifle had potential as a donor for a custom .300WSM at some future date. So I called the owner and basically said something to the effect of, "I have no interest in a 7WSM. I'll give you $400 for the rifle so I can take it apart for a project." I was a little surprised that he bit, and I was the owner of a "new to me" Winchester.

When I got the rifle home I cleaned it and discovered that it likely didn't have more than a couple boxes of ammo down the bore. Everything internally was essentially new and the exterior only had a couple of handling marks. Big whoop- when I'm done, it will have a bunch of handling marks. The trigger was a horrendous 10lbs or more and the hot glue that Winchester puts on the adjustment nut was still there. The black plastic stock had no bedding and full contact with the barrel channel. The trigger was easy enough to fix since it was the old style "Pre '64" trigger that everyone loves- a nice 3.5lb pull was easily achieved with a lighter and two open end wrenches. The stock would require a lot more to fix but I thought- what the heck, I'll shoot it "as-is" and see what it will do.

I rounded up a one piece DNZ scope mount and mounted an older Zeiss Conquest 3-9x40 that I had laying about. The scope put the rifle at 8.5lbs on the nose. I took it to the range.

Three rounds downrange did this- 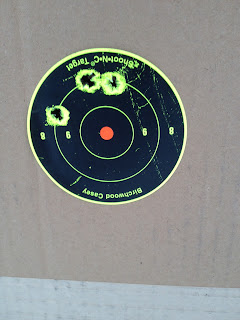 That's three rounds of 140gr Winchester "Ballistic Silvertip" at 100 yards.  Fired off a shaky folding table over a backpack stuffed with a jacket.

I'm thinking that I can work with this one and get it to group better by using a better bench and working on the bedding but that's largely just an ego booster. In the field, this gun over a pack from the top of a pressure ridge would kill a caribou from a very long way off.

Not bad for a $400 rifle wearing a used scope. If you can find one, not such a bad deal when compared to what else you can buy at that price.
Posted by hodgeman at 5:44 PM

I've been looking at larger caliber rifles. Where I'm from, you can make just about anything work with a .30-06. Here in Colorado, I'm in need of something a little bigger. I'mthinking .300 Win Mag at this point.

M.H.- the .300 magnums are personally my favorite. I've done a lot of hunting with my .300WSM and will undoubtedly do a lot more. What I love about the .300 is versatility- they just seem to do everything well.

I'm not personally convinced that there is really much difference between them either- a .300WSM or RSAUM can be built a little lighter, a .300WM or Weatherby can be loaded a little hotter.... but in the end- a 180gr at 3000fps kills very well to as far as a guy should shoot at stuff.

In CO, you've got everything from antelope to elk...nothing wrong with a .300 for any and all of that!

Ahh... the damned WSMs. It could've been a contender, if not for some bullshit litigation and the short attention span of the hunting/shooting community.

On the other hand, I fell in love with the idea of the .325wsm... so much so that I ended up getting a Browning A-bolt Stalker in that caliber. Everything about the round made me think it would take the market by storm, but I didn't anticipate Rick Jamison suing Winchester/Olin over "intellectual property" rights... and effectively driving most of the WSMs into obscurity. The result, of course, is that no one wanted to touch the WSM chambering, and instead, began to create their own short-fats (e.g. Ruger Compact Magnum, and Thompson Center's 30TC) rather than deal with the threat of paying royalties or fees to Jamison.

The .300wsm and .270wsm seem to have generated enough popularity to survive (after a fashion) but most of the others, including the .325wsm and 7mm wsm, have faded to the point where it's difficult to find ammunition. For the most part, only Winchester/Olin makes factory loads, and those are pretty much limited to silver-box soft points and ballistic silvertips. Anything else has to be handloaded.

Point is, I can see picking up a 7mm WSM as a donor gun for projects, but I'd be hard pressed to pick (or recommend) one as a go-to rifle.

I agree Phillip- tough to suggest one as a "go-to" gun unless a guy is a dedicated handloader. It's really kind of a shame since the cartridge is technically just fine for almost any N. American hunting. Its main problem is that it just doesn't bring anything to the table that the .300 or .270WSMs do equally as well.

I had intended to turn this into a .300... it shoots pretty good as a 7 (maybe not good enough to keep me from taking it apart) and now that you mention a .325.... I've wanted one for years! Since I'm stuck with the WSM bolt face, I might as well use it.