The last couple of years I've posted some results of the terminal performance from the cartridges I've seen used this hunting season in a effort to add to the collective body of knowledge.

You can find the previous versions HERE and HERE

So in the similar vein to previous year.


300WSM/ 180 Accubond- I took four animals this year with my pet Nosler .300WSM and the 180gr Accubond bullet. The first was a small cow caribou shot at a estimated 40 yards, one shot- bang, flop, DRT. Couldn't be more pleased. Despite nearly full muzzle velocity at impact the bullet did not fragment. Caribou number two was a middling bull shot at a laser ranged 255 yds. One shot broadside and the bull collapsed in a heap. Everything forward of the diaphragm was soup. No bullet fragments were found. Caribou three was a large cow shot at a laser ranged 345 yds. I shot twice and hit both times in the low lungs. One of the shots shattered the breastbone. Again, no fragments or bullets recovered and minimum meat damage. The fourth animal was a unique experience- a wolf shot at an estimated 20'. Shot twice- once too far back and once in the nose that exited below the pelvis- pelt damage made my taxidermist smile at his hourly rate. Not recommended for that purpose- but the encounter wasn't exactly planned (or even desired). The 180AB might be the best general purpose bullet for the 2800-3100fps .300s like the .300WSM, .300WM, .300RSAUM, .300RCM, .300H&H and high performance .30-06s.

300WSM/ 180 Federal Soft Point- this is most likely a conventional Speer soft point bullet. Two shots at a middling sized cow at a laser ranged 250yds. Both showed good expansion and the caribou expired  on the spot. This is a good economic load for open country shooting at deer, caribou and similar critters.

338WM/ 180 Accubond- I saw two caribou shot with this load this year. Both large bulls. One was shot at truly long range- 400+ yards that needed substantial follow up. The tough Accubond in .338 didn't really expand well. The second was shot at 80 yards. The hunter fired three times although he first hit was totally fatal. No fragments found, even on wound channels that contacted bone. The tough Accubond is perfect for this cartridge.

7-08 Remington/ 140gr Federal Fusion- this load accounted for two caribou. One a middle sized cow at 100 yards. One and done. Good expansion and exited. The second was a small bull shot at 55yds. Two shots- the first a quartering to that hit slightly high, contacted the spine and tracked under the backstrap and put the bull down. The second was a finisher shot at point blank a few moments later. The first bullet was recovered as shown below. These expanded very well at closer range with higher impact speeds which validated my theory from last year's longer range disappointment. These would do very well at typical deer ranges on deer sized animals. For longer ranges, I'd think a softer or faster bullet would do better. 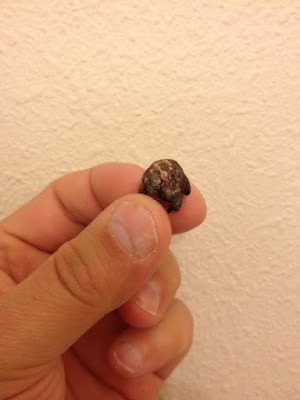 I am wondering with the amount of fish and game you harvested every year, do you even have to buy meat ever? I'd imagine that a porterhouse is pretty darn expensive in the interior of Alaska....

We buy very little meat at the store- almost all red meat we eat is caribou. We do occasionally buy ground beef for an actual hamburger on the grill and very rarely a steak. We don't buy any fish and occasionally chicken or pork for some variety.

Thanks Mike. I imagine with the limit on caribou (what was it, like 3 heads per year?) you have up there there is barely any need for purchase of the meaty kind.

If you get a chance, give the Hornady GMX a run in that 300wsm. Not sure if they load factory rounds or not, but it's a great bullet for those velocities, and in other people's rifles, I've seen impressive results. The fact that it's lead free is sort of a bonus in my book.

I do like the AccuBond, and I've used it extensively in my .243 for everything from axis deer and blackbuck to a 250+ boar hog. The caliber is a little light for axis bucks (tough, tough animals) and that big hog (two shots in the lungs/heart zone at about 75 yards and a final behind the ear that actually dropped him), but the performance of the bullets was impressive in every case.

I don't think Hornady loads .300WSM in factory but I may have to try some of the GMX in reloads.

I've been sort of leery of the mono metals- I had some less than stellar results in the way back when with some X-bullets. The technology has come a long way since then so it may be time to revisit them- I've heard good stuff about the GMX, the Etip and the newer TTSX.

I've used the Accubond for so long, with such good results, it sure makes experimenting hard to justify. I've got some GMX in .270 that I've never even shot- I need to rectify that.

I believe you're right that your options for Hornady in the .300wsm are going to require hand-loading. But you have long winters up there, right? Something to do.

The mono-metal bullets have definitely come a long, long way since the old X bullet technology. You probably know, I'm a real big fan of the ETips. The Barnes factory loads (VorTX) have performed very well in my 30-06 and in my .44mag. Winchester's RazorBack bullets are also good performers in that category.

The reason I suggest the GMX, though, is because it seems to have an edge when used in the higher velocity chamberings (>3000fps). Since you're shooting critters that are a little bigger than most of what I hunt, I'm itching to find out some reliable, first-hand experience.