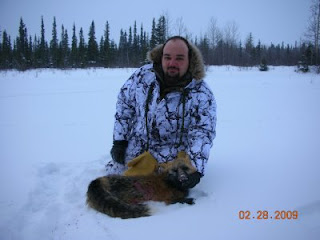 I had a wonderful adventure today. A new friend Bill called me last night and asked if I would like to go predator hunting with him tomorrow. Our longer daylight hours and warmer temps had him itching to get outside as well. My friend is a dedicated predator caller and has an enormous amount of skill using a diaphragm call. I checked my calendar (vacant of course) and the plan was made.

We travelled up a frozen river system several miles on snowmachines and planned a stalk and call hunt via snowshoes along a couple miles of ridge tops overlooking an area that was burned off in a wildfire ten years ago. The ghostly remnants of the dead spruce forest are quickly being taken over by alder and numerous other small trees and shrubs providing an ideal snowshoe hare habitat. The hares provide an ideal fox habitat.

After an hour or so of calling without result and seeing few sets of fresh fox tracks we decided to head back to the much lower river system. The upper burn area was absolutely choked with moose and they were ganged up in herds of a dozen of so. All told we saw in excess of 50 moose. The bison herd had recently been through the area and their path of travel looked like a highway through the snow- visible from almost a mile away. During our ride in we both noticed numerous sets of fox tracks crisscrossing the channels and paralleling the banks. The river is highly braided with numerous small islands sticking up four or five feet from the frozen creek surface. It would prove ideal to call from one of these islands.

After an unsuccessful set we hiked a half mile to another island and I settled behind some brush and reclined against the banks looking to set back and relax and wait on the action.I had a perfect view of the upstream channel for well over a mile and our expectation was the fox would come in from long distance. The wind was variable and a light snow had started to fall. This wasn't good- the wind had started to blow up the channel carrying our scent with it in the very direction we hoped to entice a fox to come out of. We looked at each other and said- "Unlikely but we'll give it a whirl anyway."

Bill started his calling from the other side of the island while camp robbers (gray jays) attracted by the noise squawked and flitted about the trees. After only a couple of minutes I heard a very odd sound from behind me. It was an odd sort of chortle- very much like the sound a cat makes when staring out the window at a bird dancing about within sight but certainly out of reach. I thought it may have been a gray jay or perhaps my friend making some kind of noise to get my attention. I slowly swiveled my head and there was a fox- a mere 40 feet away on the ice. I honestly don't know who was more surprised, him or me. I had anticipated seeing some fox but not this close and certainly not coming up behind me!

The variable wind was blowing from behind me so this fox hadn't winded me yet. I can only imagine his surprise when the brush pile's "head" swiveled around slowly and stared straight at him. He was moving at a trot but at the detected movement he stopped and became fully prepared to hit the gas in reverse. He still hadn't winded me but our staring contest wasn't going to hold for long. The seconds seemed long but in reality it was probably less than two. To get so close to such a wary and stealthy predator was really quite an honor. This had been a good hunt. The safety snicked off. The fox was gorgeous and just starting to "rub" with the longer daylight hours- not prime fur but a wonderful pelt nonetheless. I don't sell fur so the "prime" I'm looking for is the experience itself 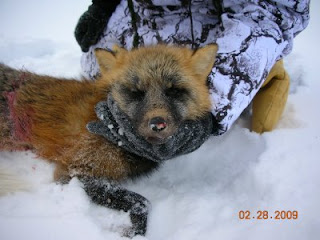 and this had been a great one.

I raised the rifle and rolled over to my right side to put the fox in the crosshairs.

The rifle cracked and I was cradling this beautiful animal in my hands.
Posted by hodgeman at 8:19 PM

I am always impressed with how beautiful the coat of a fox is! Looks like a good one and a good time!

Sounds like a fun hunting trip. Can't wait to hear more of your stories.