OK, I’ll readily admit it- I am a knife nut. I own or have owned a ridiculous number of knives and I’ve fiddled with edged objects for all of my adult life and most of my adolescent one. I carry a knife everyday. About the only place I don’t carry a knife is a commercial airline flight and that’s not exactly my choice.

In 30+ years of packing, using, abusing and being abused by knives I’ve developed a standard sort of speech about knives, a treatise if you will. It will come as no small surprise that I’ve developed some strong opinions about knives over the years that I’ll share them with you now.

As a word of caution- some of my opinions are rather strong and they may not necessarily align with yours. That’s OK. Really it is. This is a topic on which we are allowed to disagree. I will tell you that the opinions I’ve formed were done so during field use; not a manufacturers catalog so that will flavor my opinion to a degree

Blade steel- since man first alloyed iron to make steel I’m sure folks have argued about what type of steel makes the best knife. On the market today we have a bunch of steels that vary considerably in their usefulness for knife making but I think the most critical one is this- avoid stainless steel.

I know it’s pretty.
I know it resists rust.
I know it can be made into lots of knives and lots of manufacturers only use stainless.
I know all that and I don’t really care anymore.

Stainless is wonderful stuff and you can make a knife that will resist saltwater, moon dust, electrostatic discharge, radiation and all that and more. The reality is this- a good carbon steel blade is simply more usable in the field because of re-sharpening. I own a drawer full of stainless knives made out of every type of exotic blade steel known to humanity. All of them are markedly inferior to carbon steel blades for re-sharpening. A stainless blade typically is hardened to a much higher degree than carbon and is much harder to put an edge on. It will generally retain an edge for a good long while but once it goes good luck.

I have a very fine knife made out of wonder steel that cost a ridiculous sum and it lives its life in a drawer because under field conditions it simply can’t be made sharp again. I’ve used diamond impregnated stones, EZ lap, the works and nothing will touch it. The factory can put a wicked edge on it using a buffer wheel but that does me little good if I’m elbow deep in a carcass or cutting fuzz sticks to start a fire. Simply put its a knife that has a big cool factor and a pride of ownership benefit but once you hit the woods its a "one trick pony!"

Conversely I have a carbon steel blade knife that appears to be made from a butcher knife and ground down. Likely made by my grandfather and probably prior to World War 2 although it would be impossible to tell. During the butchering process of a deer it will likely need sharpened a couple of times, but it can be accomplished by any whetstone or other sharpening implement at hand. I'm guessing about any appropriate rock you'd find would work in a pinch. It takes only moments and the edge is really wonderful. I carry it a lot in the woods. 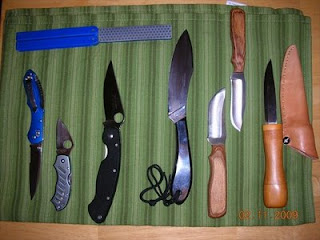 From left to right:
Benchmade with S30V, Spyderco with VG-10, Spyderco with ATS-34, Grohmann with High Carbon Stainless, Anza with carbon steel from file, Anza with carbon steel from file, Homemade with Mora carbon steel blade. These roughly go from left to right in degree of difficulty in sharpening and to a lesser degree- price!.
Now that we’ve discussed blade steel let’s discuss something else- price. As a person who’s invested a small fortune in knives I feel that I can discuss this with aplomb. Bottom line is this- lots of cheap knives will outperform expensive ones and you’ll cry a lot less if you lose one. I’ve got knives that cost well in excess of a couple of Franklins that are positively horrible knives although their maker commanded a premium price for purchase. I’ve also got a few knives that I paid very little for that work many times better than their purchase price. Knives are one thing that price is not really a good indication of future performance at all. Case in point is the Mora- often obtainable for under $20, these are practical and functional in the woods. In a lot of cases I wish I’d just bought a couple of Moras and been done with it. When I made a custom knife I found a source for carbon steel Mora blades. It cost a whopping $11 and made one of the nicest light knives I’ve ever owned. You can spend a lot on a knife and not really gain anything at all. Please don’t misunderstand me- the custom knife maker is an artisan and can make you a piece that is functional, practical and useful that you’ll be very proud to own and a joy to use. But just because you pay a premium price don’t expect quantum leaps in functionality!

On the subject of use I like to remind people that size matters. During my adolescent years it seems that everyone wanted a “survival knife” and large designs dominated the market. I’ve had several large fixed blade knives that I’ve parted company with as I’ve gotten older and (hopefully) wiser. A large knife is a pain to carry and an even bigger pain to use. I much prefer a simple 3.5-4” fixed blade knife in a practical pouch sheath for all around use. A 10” blade is heavy and it makes for an intimidating appearance but I’ve got to say despite popular press a knife is a pretty poor weapon. I realize that Bowie and Rambo will disagree but thats just my opinion. For the woodsman a knife is a tool first and foremost and a 4” blade will accomplish most anything you’ll practically accomplish with a knife.
In brief...
A knife is not a weapon.
A knife is not an axe or hatchet.
A knife is not a shovel.
Sure a knife can be pressed into service for any of those things but there are much better implements for all of them. The Grohmann in the above picture has a 5" blade and thats about as big of a knife as I can stand. Even then, it generally rides in a pack and not on my belt. It seems that an awful lot of the time I've got one of the smaller ones in my hand instead.
So there you have it, Hodgeman's brief treatise on knives. Hopefully you'll have found something you can use.
Posted by hodgeman at 12:52 PM

Good job, Hodgeman. Actually, a pretty succinct and straightforward "knife treatise". Great landscape photo, by the way. I've never been to AK before. Can I ask, roughly, what part of the state you live in? Looks like interior-boreal from the pics. Talk to ya.
DC

A friend of mine is a Chef who even went to school for it for 4 years in a place where they also do a significant amount of butchering. He says he's never spent more than 25 dollars on a Chef's knife that was worth a damn and he'd rather have a Carbon Steel cheapo he can re-sharpen in a heartbeat than a Kyocera ceramic or (insert any other stainless high-brow Williams and Sonoma catalog knife here).

I like to hunt and cook. My mother has a collection at her home of the fancy people kitchen knives and whenever I visit I end up spending a couple hours before the first meal with a couple stones sharpening all those bastard stainless steel things that don't seem to hold an edge. I find it's easier to get it over with and do all the knives at once whilst visiting than have each individual knife she owns annoy me on separate occasions of cooking.

I forge my own knives and wood chisels and am quite familiar with tempering, shaping, and putting an edge on a cutting implement and I've yet to run into a hunnerd dollar knife I'd want to use on a daily basis. My favorite fillet knife started out as a station wagon leaf spring.

I'll admit to owning a few wallhangers in that category but they aren't fighting, hunting, or cooking knives, just historically interesting.

If you appreciate knives, take a look at this knifemakers blog: