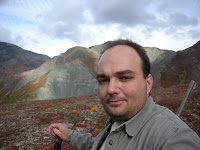 nting post. In his brief post he made the astute observation about my “slip on loafers” from a photograph on my site (If Al is that observant in the field then the hogs are in trouble!). I’ve worn that type of shoe almost daily for several years and I‘ve never given it a second consideration. So I thought I would share some thoughts about hunting attire with the readers because I tend to have a pretty non typical (at least among the general hunting populace) view of what constitutes proper field clothing. I tend to be fairly typical of Interior Alaskan hunters that I’ve met. Although I’ve purchased hunting specific clothing in the past and been disappointed often enough (think Gore Tex failures) that I’ve just quit buying it altogether.

First of all, Al is entirely right- those were slip on loafers. Specifically they’re Merrell Polar Mocs and they’re a great shoe for hunting (and lots of other things) in Alaska. I’ll preface this by saying a lot of my hunts are day-type hunts conducted close to home. As a local hunter I have the total luxury of hunting when the weather and conditions are in my favor. If it’s pouring down rain I’m likely to just stay home or at best in camp. I’m usually not travelling long distances and spending mega dollars to hunt either. Seasons also tend to be pretty generous for residents so time is usually on my side as well. If the situation were different, you bet I’d wear different stuff and hunt through a hurricane if I needed to.

About those shoes…
Those shoes are really comfortable and furthermore- they’re extremely quiet. On a final stalk there’s no heavy sole or toe cap to drag on debris and blow it at the last minute. The flexible sole hugs the foot and you can feel the terrain through the sole. The tread is a grippy and flexible rubber that’s perfect for holding on to rain slickened rocks. They do surprisingly well on ice and packed snow. The shoes are also waterproof and lightly insulated- not a winter shoe by any means but a very good spring shoe for Alaska. I can run (as much as I ever run) in them and they’re comfortable over long distances when I’m moving fast and not carrying a load. There are no laces to foul and the neoprene collar keeps out rocks and twigs and other unpleasant things I don’t want in my shoes.

Unfortunately there’s not any ankle support but without a load that’s generally not an issue- a’ la Ray Jardine’s The Ultralight Backpacker. I do keep heavy hiking boots in the truck right next to the pack frame in the event I’m successful and need to haul something heavy out of the woods. Otherwise, I’m just walking with guns. They aren’t really appropriate for hunting tundra (not enough ankle support on joint snapping tussocks) or muskeg (not nearly tall or waterproof enough) but for Interior hunting on dry ground they’re just great.

In a similar vein I tend to eschew hunting specific clothing altogether with a few exceptions. During the spring season I’m usually hunting in Carhartts. They’re not waterproof (again that weather thing) but a well worn pair of Carhartt pants (Double knee dungaree type) and a well broken in light 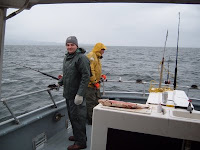 canvas jacket are very quiet in the woods and durable as nails when busting brush. If you need waterproof, real rain gear is that and in spades so don't accept substitutes. I was happy for the Hellys in the photo to the left because the temperature was in the low 30Fs and every type of precipitation known to man fell on us in quantity. (Incidentally, that Gore-Tex clad guy behind me was nearly hypothermic by lunch after his gear failed miserably.) However be aware, brand new Carhartts are terribly loud when the fabric is as stiff as sheet tin. About 2 or 3 years of work and several hundred washings do just the trick. In addition, wool clothing is warm, durable and about as silent as clothing gets during those cooler fall hunts for moose and caribou. I positively love still hunting in my wool mackinaw pants and my ugly-as-sin old-fashioned plaid wool coat with a layer of fresh snow on the ground. It’s oversize pockets carry all the goodies the prepared hunter needs without resorting to a backpack for a short outting.

About that camouflage…
I also tend to abhor most camouflage clothing as it generally looks goofy anywhere but the field and in the field it’s often just plain ineffective. If I were a Southeastern U.S. deer 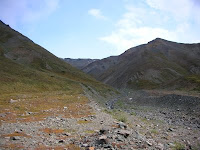 hunter I might feel differently but in Alaska I just don’t see the point. Every year hundreds and thousands of hunters from the Lower 48 (affectionately and locally known as the Cabela’s Army) pour into Alaska and bring their hunting attire with them. Not to sound snide, but you can spot a guy wearing Mossy Whatever (or similar pattern) out on the tundra at about 3 miles with the naked eye- its just too dark, the pattern is too dense and it appears nearly black at any kind of distance. Neither do dark, complex patterns work well in open mountainous terrain, like the photo to the right. There simply are very few open country patterns that work well up here, but solid color clothing in the right palette can disappear remarkably well over the variable terrain if you keep the extraneous movement to a minimum. 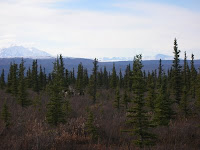 own and faded Carhartt brown (or grey, or green, or tan) with the accompanying work stains just blends into the natural colors and patterns provided by the terrain. If you’re observant and realize most animals trigger primarily on movement and noise and not color you can get amazingly close to some animals wearing stuff you’ll even wear out in public. I once approached a small caribou band to within 30 yards- wearing a bright blue sweatshirt (The photo I took is to the left). In the bear hunt photo from a previous post that is actually what I wore to the office that day. Works great at work, works great in the field and will last through years of hard use- that’s a very good deal in my book.

My sole exception is winter camouflage when I’m predator calling. There is just no good way to hide in color when the world around you goes black and white. For calling in the wary predators like lynx, wolves, coyote and fox that are attuned to every variation of their environment, a good winter camouflage is essential. They all work reasonably well although I’m currently partial to NatualGear’s Snow Camo. A friend of mine sews ponchos made from el cheapo white bed sheets and does just as well so I’m sure its not rocket science. I think in winter the rule is to look like twigs, like snow or like both. There just isn't a lot of variation in the winter terrain's appearance.

About Scent control…
I realize a hot topic among some Lower 48 hunters is Scent-Lock clothing. I’ve never used it and it may be the cat’s meow on a white tail stand in Iowa but out on the open tundra or in the mountains if you follow the ages old advice of “wind in your face- fair chase”, 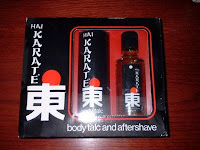 scent control is kind of moot. I don’t advocate shaving in Aqua-Velva and wearing Hai-Karate but playing the wind is a certain way of ensuring animals don’t ever smell you. On a realistic note, most Alaskan animals aren’t terribly scent adverse to start with (unless you're wearing Hai-Karate!). There are numerous stories of moose walking into a camp (with a fire no less) while the hunters are cooking dinner. I’ve personally been winded by caribou without spooking the herd- bow range might have been iffy but rifle range was pretty simple in retospect. A bear’s sense of smell is so good (2600 times better than human ability or thereabouts) that I doubt the best Scent-lock ever made stands a chance. Bears do trigger on scent but I think that it sometimes works both ways in that scent often just makes them curious. Bears are infamous for dual identification- sight and smell, hearing and smell, smell and hearing etc. before bugging out once they know you’re human.

So in short I look for some different things in hunting attire than lots of folks, namely- durability, adaptability, and quietness. Not that everyone should do it my way but on your next hunting adventure give some things out of your closet you hadn’t considered a try. You might even be surprised at how well they work in the field despite what some hunting gear company's marketing department will have you believe. Good Hunting!
Posted by hodgeman at 4:10 PM

I bet you can run in them, I could run too in chest waders and a tutu if a danged bear was hot on my tail!

And I kid you not, there was a guy back in Jersey that swore by Hai Karate aftershave as a buck attractant. I am not kidding. Or maybe it was Old Spice...

I once worked with a guide here in Montana (he is now a air traffic controller in Juneau) who wore what he called "Romeos." Sort of a slip on fleece lined loafer. I thought he was crazy, but he loved them.

Firstly - you guys had Hai-Karate! too! I thought it was so irredeemably naff that we only had it in blighty during the 70's. The ad was fantastically cheesy.

The traditional plaid tweed hunting coats the some people here wear contain many of the same tones and colors as the faded carhartts I'm wearing as i write. I'm starting to think that surface texture may well be a better source of concealment than pattern.

In the park squirrels are very had to spot when they're still, as each strand of their coat is several different colors from top to bottom giving a 3D element to the pattern of their coats. Much like faded clothes, where the sunlight has bleached the top layer of the cloth.

I remember being jealous of people who had the money to buy fancy camo. I have always wore old hand me downs and dull colored work cloths. I laugh about it now since we all have to wear blaze orange here in tennessee. with 500 sq inches of blaze orange on and a orange hat what does it matter what the rest of the clothing looks like.

Nice post! I don't know that I have much to contribute, except that a lit cigarette in the marsh is a terrific duck attractant. Other than that, I'm still learning.