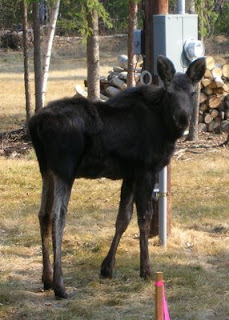 My family was privileged to an unexpected treat today. About mid-morning my wife spotted this cute little guy wandering aimlessly about the backyard and took several photos and a video. The moose calves came about two weeks ago and as you can see this young calf is already the size of a decent pony. Next year about this time that "little" moose will weigh 800-1000lbs if it manages to avoid bears, wolves, trucks and starvation over the winter.
A lot of folks would think this little one is lost or has somehow been abandoned by its mother and every year several calves are inadvertently killed by well meaning folks wanting to "help" these "abandoned" calves. A couple of scenarios can occur- the people manage to move the calf and the mother cannot find it and the calf dies or the mother moose (not as far away as folks believe) finds the calf being harassed by bipeds and some people die. A charge by a moose with calf simply must be seen to be believed. As an aside I am many times more afraid of mother moose than grizzly bears while roaming the back country or even my own backyard. By the way- this one rejoined his mother about two hours later and they went back into the boreal forest together.
In the normal course of a day (18 hours long and mostly browsing) a mother moose will often leave a calf in a safe looking spot and pillage the woods for young vegetation to produce more milk to feed these young ones. The caloric needs of a lactating moose are simply phenomenal and the fact they even can pull it off on a diet of willow buds is even more amazing. In fact, the rate of "twinning" (producing two calves) is one of the leading indicators to game biologists of the quality of the browse in the area. As twinning rates drop the game harvest is often increased to take pressure off the habitat and allow willow to grow back. In the old days the harvest was often left static and the moose would strip the area of willow and it would be replaced by alder, a less nutritious browse and a preferred habitat of the Interior grizzly. This would set up a long term decline of moose numbers in the area that could take decades to reverse.
Moose calves are often the victims of predation by grizzly bears (who it seems time their exit from the winter den to coincide with calving season), wolves and the odd large, mature black bear boar. Other dangers more prevalent near civilization are well meaning tourists and cheechakos as well as the more usual motor vehicle.
What are this calf's chances? Given a recent ADFG study about 50/50 in this area to reach next spring. If he were born farther south in the predator control area it would be slightly higher- call it 60/40. If he were born farther north near McGrath his chance would be only slightly higher than zero according to a recent game count that showed "zero" yearling moose survival rates. Given his reasonable chances I look forward to seeing this guy wandering around the area all summer and hopefully next year.
Posted by hodgeman at 9:49 PM

How interesting that some people think they know how to take care of animals better than the animals themselves do! The more removed we get from nature, the more arrogant we come about our "necessity" in the scheme of things.