The Porky Tree and Other Bear Tales... 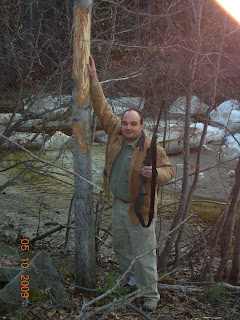 Well spring bear season is progressing rather well and although I've not got a bear yet I'm spending lots of time in the field and getting to see some really interesting things. That's the bottom line- being outside and having a good time. One of the things I found is some trees that porcupines have been feeding on. The appearance of this tree gave us some hope as it looks somewhat like a tree that a bear has marked. Alas, no bear hair or tracks and the resulting damage is notoriously porcupine like.
Porcupines will climb up and strip the outer layer of bark and consume the sap rich inner bark. The damage to the trees can be significant including death and collapse of the tree. After we finally decided this wasn't a bear mark (curses) we discovered numerous trees in the area that were causalities of the porcupine feeding frenzy.
The height of the mark was exciting. If it had been a bear mark it would have been a really big one. I'm 5'11" and reach over 8', so as you can see the bear would have been a really good one to mark that tree. Darn porkies...

The other piece of excitement came when we explored up a creek bed. The 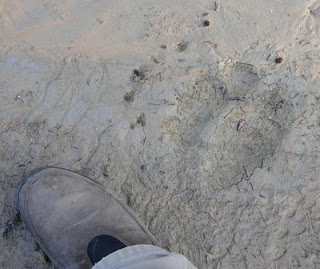 creek ice has only recently receded and left the banks a muddy mess of clay. Hard walking but great for tracking. We found this bruin's track and it got us really excited. This is the Interior grizzly that every hunter dreams of.

The track itself measures 8" across the front pad (my foot as shown in the picture is 6" across for comparison). If the rule of thumb about sizing bears from tracks holds true this is a very nice bear indeed. The rule goes like this- you take the width of the forefoot track in inches and add 1. The result is what the bear should "square" when skinned. Let's see- 8"+1= 9 feet!

That my friends might not be much to get excited about if you're talking a big Kodiak or Kenai Peninsula brown bear (personally it would excite me anywhere..). But for an Interior bear that is absolutely huge. The "square" of the bear is determined like this- you take the bear's hide and measure from tip of nose to tip of tail. You also take the outstretch arms and measure from fore claw to fore claw. Add those two numbers together and divide by two.

To give those dimensions some meaning it would be a bear that measures 9' from tip of nose to tail and 9' from claw to outstretched claw. The measurements could also be 8' and 10' but any way you slice it- it's a big, big, Alaska big Interior bear.

Disappointingly, we followed the tracks about 1/2 mile to a bait station. The station looked like a war zone. On the previous evening this guy had absolutely demolished it. I don't know what the owner had in the bait barrel but the bear had moved the 55 gallon drum about 25 feet and emptied it after pulling several 1/2" lag bolts from the tree it was attached to. Then he squashed it flat. The raw power of these animals is nothing short of amazing. A grown man can stand on a drum on its side and jump up and down without much damage- the weight on this bear must be nearly 900 pounds. The rule of thumb is one hundred pounds per foot of "square" in the spring season- fall weights can be much heavier.

With the presence of the bait station I can no longer hunt this bear legally (unlike black bears you can't hunt grizzlies over, near, or in the influence of bait). I can't imagine the bait station owner will leave it up and continue feeding this monster as it would eat an enormous quantity of bait and nothing else will even dare show up. I plan on keeping tabs because if the bait owner calls it quits and takes down his stand the season officially reopens on this big boy!

In other hunting news I tried predator calling for bears using a diaphragm call. Didn't manage to alert a bear but I did call in a fox and a coyote. This is the wrong time of year to take either of those species but the entertainment value was immense. We've also seen hundreds of sand hill cranes, swans and thousands of geese over the last two weeks as well as they move through the area on their annual migration. Spring is here and I'm out enjoying it!

Bear hunting has been a favorite of mine since coming out to California in 1980.
They are always smart and unpredictable, like Wild Hogs, of which they are distant cousins to.

Strewth that's some bear!
Good luck out there fella!
SBW

I just found your blog. Very informative. You have been added to my blogroll.