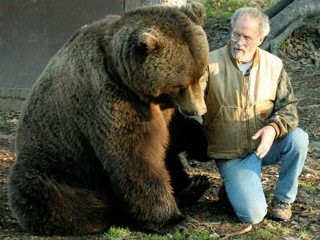 Great post. I saw a story about this only this morning. I think most of the world looks at wild animals as people with fur. Although I think people are more like animals without.

Have a great Memorial Day Weekend, or whatever is left of it.

Really great writing fella, the more i read of your blog the more I like it. I thought your coverage of the issues was very fair, and wittily put too, which never hurts.

When I lived in Colorado, a bear took a liking to a rancher friend of mine's livestock and his children's pets. He actively discouraged the bear to go away.

The state relocated it THREE times and the same one came back and snacked on family pets and livestock some more. He, grudgingly, ended it with license from the state with a .300 WinMag. And this is a bear that had been actively discouraged by EVERYONE to go back to the national forests to the point of darting and physical relocation but he knew where easy food was.

I was there once at supper for a conversation Curt and wifey had with daughter one time about why she couldn't get another dog. "That dang bear is just going to come eat it anyway."

I can't imagine how big an idiot this fellow must be.

Excellent editorial and one which mirrors my exact sentiments.

Timothy Treadwell should have taught us all a little better through his very own self indulged, and delusional imagery of life with wild things better off left wild!

Great piece. Advocates for wildlife and wild places need to speak up about irresponsible morons like this who do nothing positive for the critters they claim to love. The fascination with bears is so deeple embedded in human culture, that it doesn't surprise me there are still Treadwell-types out there doing stupid things with them.

Episodes like this are not doing much for the image of the fine state of Alaska, either, as I'm sure you are aware! Take care.
David C

It's folks like the guy in your article that are directly responsible for human and wildlife incidents caused by gullible people believing the garbage these "animal lovers" say and write.
-ov-

Great, finely-written post, Hodgeman. The Treadwell film was a horror flick from start to finish and your take on this latest incident is very well stated indeed.

Great writing, but I disagree. The way I see it, man and nature should live together in harmany and thats exactly what he is doing. I know its not the smartest thing, but he knows and accepts that. If he wants to spend his life in the alaskan wild with the original settlers (being the bears) let him. I saw the documentry on animal planet and what I saw was a man doing what he liked. Kind of like having a beer with your friends, except he was going on a canoe ride with bears. Leave him alone.

The funny thing with you Americans, is that you all too often are much more like communists than any Russian or Chinese: You just can't stand individuality, nor freedom of choice if it ventures beyond your own narrow idea of the concept. Anyone not in compliance is labeled "nut" or "crazy" and is free to be ridiculed, harassed and prosecuted. Be it individuals, groups - and even other nations.
And the "funny" thing is you think you're doing good deeds while you're at it. - As the Alaskan officials is doing in this case. It bears all the signs of classic psychopathic behavior. - Nice...

- Get well soon, with love from Norway.

I've published Nils comment but I have to wonder if its a commentary about Alaska wildlife or American foreign policy? I'll let the reader decide...