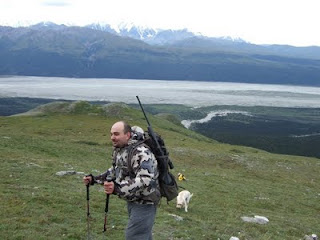 I know its been a good while since I've posted but I've got a good excuse...I've been roaming over hill and dale looking for a likely spots to sheep hunt. Putting together a sheep trip isn't exactly a difficult undertaking but it can be a challenge to line up partners, equipment, schedules and get it all into an area likely to contain a ram.

Given my planning bent I had most of this stuff arranged well ahead of time but as the adage goes a well thought out plan just gives you a place to change it from when it falls apart.

And fall apart mine did.

My plan included a 9 mile mountain bike ride followed by a 4 mile 2500' climb to put us into great sheep country. My party included two friends that I'd hunted with several times before but I was the only guy with a sheep tag. One of my companion was just in for the trip and the other was looking for a nice Interior grizzly. The "in for the ride guy" cancelled on Monday, the grizzly hunter on Tues...rats. In the meantime, I had been contacted by another hunter from the state who's partner had cancelled out last minute on him as well.

A leery as both of us were about arranging a hunt with a total stranger we agreed to meet and discuss the possibility and see if we thought we could get along on a strenuous hunt together. As luck would have it, we found ourselves well matched as hunting partners with similar levels of experience, fitness and objectives for the hunt. That just left us the logistics.

Equipment was no issue, we had that covered in spades- it was a short matter to arrange who had the better of a particular item and split it up. As far as area is concerned we were in trouble. Both of our plans had included packing in a long distance and having a partner (or two in my case) to help ferry the weight back out- since we both had tags the task of hauling two sheep among two hunters was a far cry from one split three ways or even among a pair of hunters. 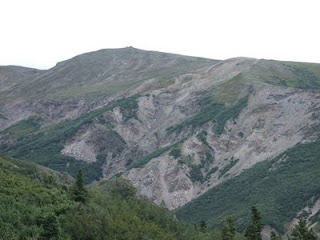 We looked carefully at the map and looked for other likely areas that were perhaps closer to the road system- identified a couple and made plans to hike in, scout the area and cache some of our camp. We visited the first of these over the weekend.

The initial climb in was along a rugged goat path of a trail that quickly rose through the tree line (1000' vertical in 1/2mile) and terminated midway on a rocky face. At that point one turns and heads up, scrambling on fours up the scree for perhaps another 200 feet until you hit another goat track of a ledge skirting over the top of three slot canyons. Another 200 foot or so scramble up a chimney choked with deteriorating shale and you pop out in a likely looking alpine bowl on a long semi circular ridge rimming a drainage. Exhausted under heavy packs this looked a likely spot as any we'd seen- discovering sheep scat in the meadow proved the sheep had at least been here. We followed the ridge for another mile and cached our gear under a short ledge. 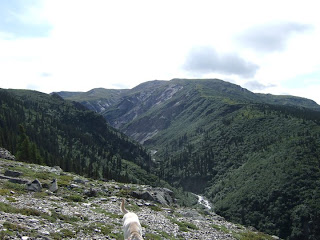 The weather had been deteriorating all day and now in late afternoon the wind screamed along at 50mph and carried a few drops of rain. Completely exposed to the brunt of the wind on the barren mountain was something to experience akin to sticking your head in the jet stream. As we picked our way back down the bowl I glanced across the drainage and detected movement through wind-teared eyes..."What is that? Do you see that movement?" I asked in a shout to be heard over the gale.

"I do...they're sheep", said my new partner- now beaming with excitement. Over the next fifteen minutes we watched transfixed as an entire band of sheep filled the adjacent bowl (on the lee side of the ridge) to escape the howling wind and began feeding there. Looks like sometimes despite meticulous planning its still hunting and we were doing alright. Not that I'm much of a believer in luck, but I do hope that what passes for it holds out for opening day when we hope to be in the drainage with a couple of likely rams in our sights.
Posted by hodgeman at 8:00 PM

I was always amazed by how many sheep I saw in the Brooks Range as I scouted around in a little Maule on floats. Beautiful pictures you've shared. Thanks.