I'll pick up the narrative where I left off in my last post, "Scouting for Sheep" so the reader is advised to read up on that before they continue. 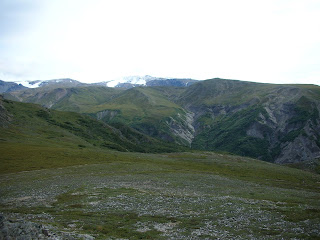 After establishing our cache of food in the rocks we made plans to hike in to begin the hunt on Monday in anticipation of the Wednesday opener. All evening I packed and checked and got my gear in order- without substantial food or my heavyweight tripod my gear weighed in at 51 pounds. My new hunting partner arrived right on schedule in the morning and we departed for the hunt area which I'll refer to in the best sheep hunting tradition as "XXX Creek". Arriving at XXX Creek we were surprised to find another pickup parked there- it seemed awfully early for someone to be walking in to begin a hunt considering we thought we had beaten everyone to punch ourselves. With our food stores already cached at the head of the drainage we had no choice but to continue as planned-regardless who might be sharing the drainage with us.
The initial ascent went slowly given our heavy loads of equipment and we were much relieved to to finally break free of the treeline. At the tree line the trail to the top turned painfully up- gaining over 1000 feet in elevation in a little over a quarter of a mile. We cautiously climbed inch by painful inch up the slope watching our footing because a tumble over the edge with our unwieldy packs would result in a long fall on broken rock only to be stopped by being strained through the brush. An errant piece of scree inadvertently knocked loose reminded us just exactly how far down the mountain we would fall if we misjudged our footing. The crashing went on for what seemed an eternity as it bounced down the scree chute and through the brush. 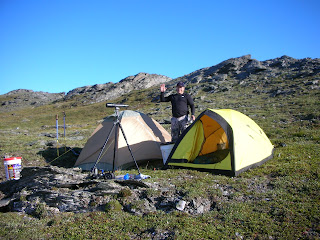 When we finally summited the scree chute we were rewarded with a wonderful vista and an alpine meadow full of fresh sheep scat. Things were certainly looking up. We decided to place camp in a sheltered rock structure a couple of miles away on the top of the ridge that might give us some relief from the relentless wind. When we were placing our camp it was obvious we weren't the first sheep hunters to shelter in the fortress of shale- decades of sheep hunting in the area had left few places like this secret. I turned over a piece of flat shale to weigh on a shallow tent peg and found an empty C-Ration can. Even Frank Glaser (see Alaska's Wolf Man), a pioneering market hunter from the turn of the last century had written about this drainage, hunted sheep here, and established a roadhouse a few miles to the south.
With camp established we turned out attention to the business at hand- finding a legal ram to shoot on opening day. We donned light packs- just snacks and optics- took rifles in hand and set off to the east toward a promising ridge between both points. Sheep hunting is a game of optics- while sheep are readily visible miles away in their white coats judging a ram is a game of extreme patience. Every half mile or so we'd set up the scope and spend at least half and hour scouring the cliffs and meadows looking for a ram. 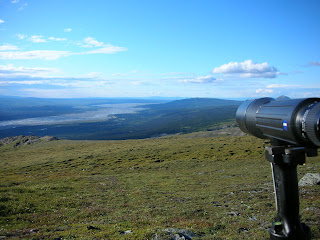 As the afternoon wore into evening the sheep became more active and began an evening feed. Suddenly, as if rather unexpectedly a small band of rams wandered over a bluff a mere half mile away. We quietly sequestered ourselves in the rocks and looked them over intensely with the Zeiss glass. I've often wondered if the rams could feel our gaze as we concentrated on them as intently as any "spoon bender". The band contained just three rams- two immature rams who were quite obviously not legal and one grand old ram who favored showing us his left side.

That left side was broomed heavily and what few glimpses we got it  appeared either full curl or slightly broomed. His bases were very large for a sheep younger than 8 years old. A legal sheep either has to be full curl on either side or broomed on both -so either of those conditions would make this guy legal...on Wednesday morning. We changed priorities immediately, no longer looking for a legal sheep we now decided to quietly bird dog this guy for the next two days until the season opened. 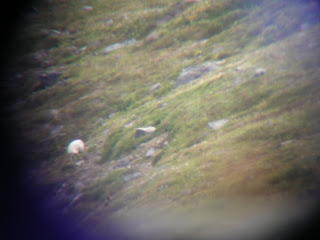 We followed him the rest of the evening from a mile out, desperately trying to stay down and out of his line of sight. Since sheep have vision the equivalent of 8x binoculars that's not the easiest thing to do but we appeared to be avoiding alarming the sheep as they finished their evening graze at leisure. We then followed them another half mile until they were ensconced in some steep cliffs to bed for the night and chew their cud. A faint hint of cloud began to pour through the pass to the south but we gave it little thought since the weather had been perfectly clear with bluebird skies and just enough breeze to keep the bugs at bay.

Retiring to camp at around 11:00p we watched a band of 6 caribou bulls with massive racks and shovels make their way over a ridge a mile distant as we ate our freeze dried dinners and drank a cup of coffee. The sky turned a wonderful shade of pink as the setting sun reflected off the braided river 4000' below. 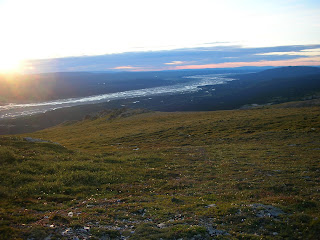 Life was good. Very Good. But nothing scares me like a good day since the law of averages never sleeps.

See this?
http://www.outdoorlife.com/photos/gallery/hunting/2011/08/alaska-sheep-hunting-trophy-sheep-hunting-alaska
I had no idea what "sealing" a sheep horn was but I know now.