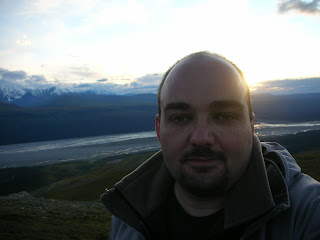 As the sun continued to set we realized just what an exhausting day we'd had- a long, hard climb with heavy packs followed by more mileage searching out a ram. I've got to admit that getting in the bag felt good. Shedding heavy boots, jacket and outer layers; I nestled myself into the warm down cocoon and within moments I was dozing contentedly.

A short time later I was jolted awake. The cooling earth to the south was causing the air to contract- generating a stiff breeze. The conflicting weather systems consisting of the low pressure cell moving off the Gulf of Alaska over the pass to our south and the stationary high pressure parked over the Interior were competing for dominance and that competition resulted in wind... a lot of it. Sheltered as we were behind our fortress of broken shale we were spared a direct onslaught of the wind but the williwaw blasts still managed to generate a random pattern of gusty blasts that rattled our tents unmercifully. I'd estimate the winds at elevation to gust in 60mph range. I had utmost confidence in my single wall mountaineering tent to survive such a blow without damage but there's a huge difference between surviving a windstorm and sleeping through one. I'll be the first to admit that I'm a light sleeper in the wilderness and the windstorm partnered with my new partners snoring ensured that I slept little and what little I got was fitful. Only after daybreak with a warming Interior helping that high pressure system regain the upper hand did I manage to get a couple hours of sleep. 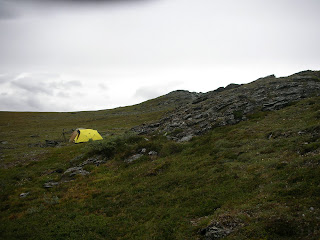 Waking for the hundredth time about 8:00am finally did it- an aching back and bursting bladder finally convinced me to wake up and stir around. I gathered my water bottle and filter and walked the short distance to a small seep of water running across the alpine tundra. It only took a few minutes to pump 48oz. of water and just a few moments later I was back at camp making oatmeal and coffee in the Jetboil. Hot food and caffeine never tasted so good after a long restless night. I reflected that last night's wind was precisely the reason a couple of my mountaineering pals read the isobar charts the way other folks read their email or morning paper. As the elevation increases the margin for error in predicting the weather gets perilously slim. A thunderstorm that presents a stiff breeze and inconvenient rain a couple hundred feet above sea level will be much more dangerous at 5,000 feet and perhaps generate fatal conditions at 10,000. 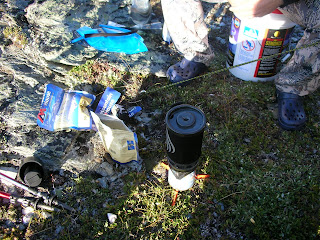 With my partner rousing a few minutes later, I passed the stove to him so he could eat his breakfast and we could get moving for the day. He ate a quick breakfast and we packed daypacks in anticipation of spending the day exploring the adjacent drainage several miles from camp where we saw the legal ram bed down yesterday. Setting off on a easterly course, we found the hiking much more pleasant if we plotted a course along the pressure ridges of gravel and rock near the high points of the saddles and along the spines of the ridges. These firm surfaces made much better terrain for walking that a straight line course across the alpine bowls filled with tundra. An extremely rainy summer had left the spongy tundra full of water with many seeps and tiny ponds with vegetation that was soft. Tundra is often described as walking on a soft mattress covered in bowling balls and the description is as apt as any I've heard. 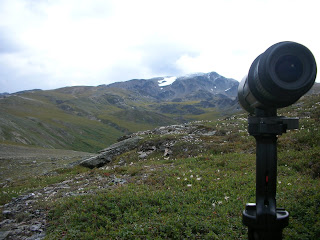 Distances across the wide open tundra were also very different than those at lower elevations. For instance, the straight line distance across an alpine bowl might appear to be a few hundred yards but in reality would be a mile across. Without substantial vegetation to give size reference we found estimating distances beyond a couple hundred yards nearly impossible. A short distance away a large bull caribou followed us curiously appearing every few minutes. A couple miles along the ridge and we were arriving at the round topped peak where the ram was feeding the evening before.Taking our time and moving slowly we found a lot of sheep sign and a colony of exceptionally vocal hoary marmots. Making our way to the edge to look over the main drainage of XXX Creek we found ourselves staring at the ram, just a 1/2 mile away. With a catch- there was a 3000 ft deep chasm between us. 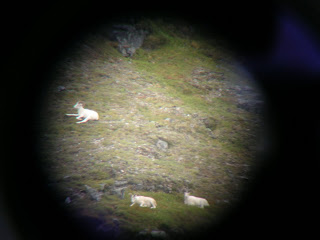 We kept low and out of line of the rams keen eyesight. At this range, with the rams already bedded in escape terrain we were unlikely to spook them but we were certainly likely to change their movement patterns. Eyeing the deep canyon between us, reaching the ram would either entail a hair raising descent and an exhausting climb in a direct line or a long arduous walk several miles up the ridge and crossing the drainage where it was shallower. The first option was foolish- chasing sheep in their escape terrain was ridiculous. One whiff, one inclination and that ram could spook and leave us sucking wind while he effortlessly sprinted over the ridge where we'd be unlikely to find him again. The second option looked better although longer since sheep rarely look for danger from above them and getting above the ram from the east and approaching down the spine of the ridge would be relatively safe although a hike measured in miles. We decided to just hang tight and quietly shadow the ram from here. We took several photos and the ram finally gave us a good look at that right horn. Broomed and he was legal. We'd found our first target. 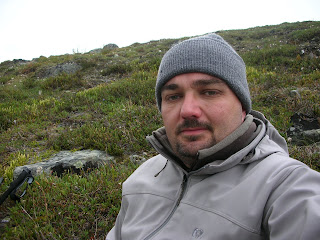 Exhausted from a long night, I found a soft patch of grass out of the returning wind to lay down and take a nap in. I've got to admit that the nap was something I needed desperately. I slept very deeply and after a couple of hours I looked up- just a few feet away a collared pika (a small member of the rabbit family) was looking intently at me. I'm quite confident that had I not woke up, that little guy would have climbed right up on my chest and foraged my jacket pocket for trail mix. I roused up and immediately noticed what had broke my nap- a few small drops had fallen on my face.
Rain. 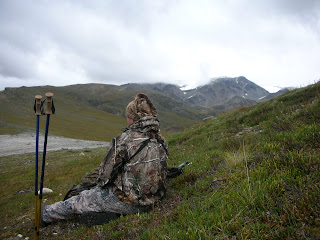 I quietly made my way down to where my partner was bivouacked. He'd gotten a short nap and eaten some lunch while keeping periodic eyes on the ram. Looking around I noticed the ceiling had moved in and no longer did we have a bluebird sky but the entire sky was the color of matte stainless steel- dark and impenetrable. The ceiling had also moved down considerably and was now obscuring the higher peaks at 8,000 feet. While we watched the ram we saw the occasional low flying cloud sail up the drainage. The weather was deteriorating more rapidly than we had thought. We decided the ram with the deteriorating weather would be unlikely to move from his perch. We thought we would take a look at the head of the drainage where we would have to cross tomorrow in a bid to take the ram. We placed the ridge spine between us and the ram and headed up the drainage to the northeast toward a dramatic looking bluff of soft mineral that was obviously breaking down rapidly turning the glacial stream flowing through the drainage a green-gray color. 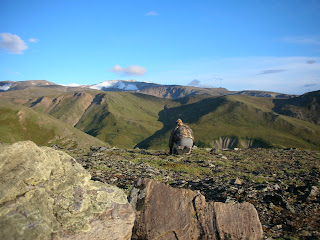 As we were walking out the ridge my partner pointed and excitedly called out, "Hey look! Is that a bear?"