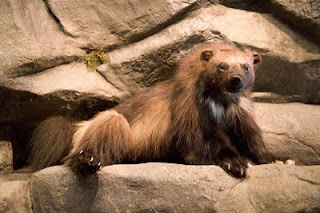 As I peered down the ridgetop, I saw immediately what my partner was referring to- a brown/blond animal moving toward us at high speed! As I looked closer it didn't have the lumbering gait of a grizzly bear but rather the characteristic lope of a wolverine! Some 100 yards away it did have the appearance of a bear, especially in the frontal profile- but this creature was closing the distance rather quickly and was bearing down (rather determinedly) toward my partner. I was partially obscured by a small pile of rocks and only after we both moved laterally did the wolverine see there were two humans and break off to the other side of the rock pile. Hearing the animal scrambling over the loose shale behind the scree pile, what it did next surprised me greatly. It popped up behind us. I'm used to seeing wildlife and occasionally animals do things that surprise us. I fully expected this wolverine to scamper off down the hillside, happy to escape the presence of two other much larger predators- not circle around to flank us!

Being in the presence of a creature with the panache and reputation of a wolverine had my rifle at my shoulder- not that I expected trouble, but the wolverine's behavior was already surprising at this point. I must say at this point that wolverine attacks on humans are exceptionally rare and most serious research into such degrade pretty quickly into stories and legend. But there are several documented occurrences and a few more that fall into "likely" wolverine attacks but the events are not even remotely common. There are also several local stories of wolverines that have exhibited stalking behavior toward humans. Would the wolverine have had a go at my partner had he been alone? No one could say with any certainty, but I think so given the determination he exhibited in the charge. What he did next surprised me even more.

As he came around the scree pile he came to a full stop a mere 20 feet away- much closer than I've ever been to a wild wolverine. This was, in fact, only my fourth sighting of these creatures in 12 years. Looking at him over the top of the rifle scope with my index finger resting on the trigger as he emitted a low growl standing on his rear legs, we sat "eyeball to eyeball" for what seemed like an amazingly long time. He seemed genuinely irked that he rounded the pile looking us in the face rather than seeing our vulnerable backs. I must admit that the thought of tangling with this guy was as appealing as juggling running chainsaws (with similar results) and I gave serious thought to killing it right then and there. In fact, I planned that if it dropped to all fours facing me I was going to blast it off the mountain with a .300 magnum shell. I've never been seriously challenged by a wild creature that weighed perhaps all of 30 pounds but here I was...and I've got to admit I didn't like it. 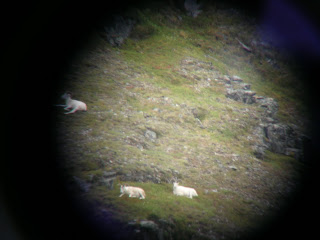 Much to my relief, gulo gulo (the glutton) dropped to all fours headed away from us and speedily galloped down the ridgetop in the direction of the knoll we'd just rested on. I'd hate to think of what might have happened had I napped a bit longer and had this thing wander across me dead asleep. We scouted around the ridgetop, thinking we might have disturbed it in its den but we found nothing but barren rocks for hundreds of yards in every direction. Slightly shaken, but undeterred from our sheep mission, we continued along the lee of the ridge toward the head of the drainage. Stopping periodically we looked across the top of the ridge beyond the drainage to our ram, still resting on his perch chewing his cud with a couple of other immature rams for company. 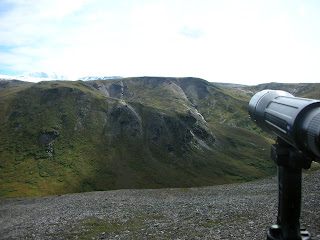 After a couple more miles, we could visually scout a route across the drainage and onto the opposite ridge above the ram. We held a "council of war" as O'Connor would have written and made a plan to begin our stalk at first light (about 4:30am). We'd make a long, arduous hike up and around the head of the drainage and climb the opposite ridge to a point where we could hopefully get a clean shot at the ram without him spotting us or falling down the cliff that he presided over. We glassed the terrain and looked for potential obstacles, consulted the map and reckoned the stalk would entail a 5 mile hike from camp and a vertical ascent of an additional 1000 feet. Unfortunately, the 1000ft climb would only be possible after a 1000ft descent through the drainage and an equal ascent to our level on the opposite side. It looked exhausting after our activities of the last few days. 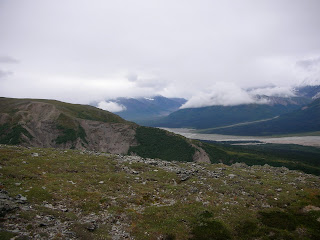 We crept up the ridge to peer over and I was surprised again to not see the ram, but a solid wall of thick cloud had blown up the drainage. The ram was perhaps a 1/2 mile away and now swathed in fog. The sporadic rain that had fallen since I woke up from the nap turned into a more steady rain. The ceiling which had been unlimited yesterday had steadily moved down to our level and continued to drop. By the time we had hiked a half mile on our route back to camp, visibility had fallen to a mere 20 or 30 feet. Out on the barren alpine tundra, without a visible landmark to guide is back to camp we would have certainly become lost without a GPS. Even with a GPS we'd get off course within a few minutes if we didn't make a conscious effort to follow the indicator. We quickly abandoned the concept of getting a bearing and then turning it off in a bid to save battery life. The hike back which had taken a mere hour on our way out took over three to get back. To make matters worse, a torrential rain began to fall soaking our boots and running through any chink in our rain gear armor. 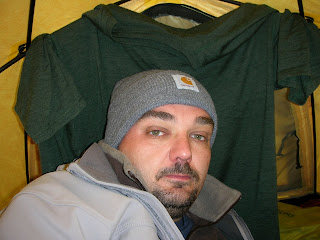 Arriving back in camp, we piled into our respective tents and I stripped off whatever wet garments I had (which were nearly all despite serious rain gear), made an effort to mop up the residual water in the tent with a handkerchief and then I climbed into my bag to warm up. I must admit, the thought of the weather turning sour like this was deeply discouraging and given the exceptional weather we'd enjoyed so far in the hunt, put a cramp into my spirit I was having a hard time overcoming. I ate a little food and peered out from the door at the steady rain and obscured peaks that surrounded us.

The high pressure system that had given us blue sky and fair breezes had finally given way to the low pressure system pouring over the peaks and through the passes to our south. We didn't know it at that moment but the snow line was now creeping from 8000 ft to just a few hundred feet above our camp at 5500ft. But we couldn't know that- the ceiling had dropped to just 2000 ft., nearly to the valley floor far below. Without visibility, sheep hunting in this weather was useless. Just useless. The only way we'd bag a ram is if he wandered into our camp and became entwined in our guy lines. Busted.

At this point, I did something most unusual on any Alaska hunt. I pulled out my Blackberry and fired it up. Given our elevation and proximity to an AT&T microwave station, perhaps I could get a signal. Surprisingly I did- its becoming more common to get such signals as our communications infrastructure grows- a few years ago this would have been impossible. I navigated to the NOAA website and checked our forecast. Days of this weather without change as the low pressure system became the dominant climatic force in the region. That low system brought heavy rain, low cloud, no visibility and a broken spirit. With just a week scheduled to hunt and no break in the weather in sight our useless turned into hopeless.

Like broken men we donned our rain gear and began packing our soaking wet camp for the long descent off the mountain. I couldn't help but feel like we were throwing in the towel but given our current situation our only other option would be to hang out in our tiny mountaineering tents, try to stay dry, try to stay sane and think about rams. We planned to hold our schedules open in the event the weather broke we would make another assault up here after the ram.  With a heavy pack and a heavy heart, I walked off the mountain.

This is an excellent series of posts, really loking forward to hearing the next instalment.

How about a review of how the kit is performing so far? particularly the new pack.

This has been a great story! Sorry about the weather but thanks for sharing!

SBW- I probably will do some kind of "Hits and Misses" gear review in a bit. I've still got the last day of the sheep hunt and 2 great caribou hunts to write about!

I tried a lot of great new pieces of gear this year...the pack wasn't one of them. Giving the maker a chance to make it right before I say a whole lot.