Book Review: The Call of the Mild by Lily Raff McCaulou 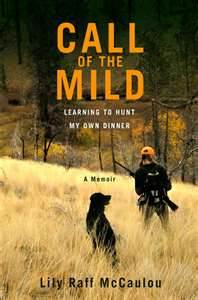 Some time back I was surfing on Facebook and a post about a NY Times Op-Ed piece about a "new" trend in hunting was linked and the poster asked, "What do you think?" I read the NY Times piece and found it interesting but (at least in my opinion) written with a perceptible  tone of derision that modern, sophisticated, educated humans would sally forth into the woods and hunt for their own dinner. The authors mentioned had all published a book or two about it and I'd read nearly all of them. I've reviewed a couple of Rinella's books (admittedly not on this blog) and last year published a piece about Georgia Pellegrini. I had corresponded off and on with Tovar Cerulli over on Holly Heyser's now (sadly) defunct blog several times and I'm happy to report a review of his book is forthcoming on this blog as well. The last author was Lily Raff McCaulou, whose book The Call of the Mild had just been released and I was completely unfamiliar with her work. I posted my opinion about the piece and at that moment one of those occasionally remarkable things occurred.

By coincidence we were members of the same hunting and conservation organization. I wasted no time in dropping her a note offering to review her book for my reader's pleasure and she was gracious enough to comply. A few days later, review copy of her book hit my mailbox. I had to shelve the review project while hunting season and some out of state travel occurred but the inevitable happened.

While I make every effort to stay active in winter, at some point the dark and the cold just overwhelm my desire to go out and our brutally long Arctic winter gives me some time to catch up on my reading and nothing makes me happier than reading about hunting and fishing. Particularly well written hunting and fishing adventures.

I'll give you a brief synapsis of the book but you really need to get your own copy to read it in depth since I won't be able to do it due diligence here.

Indie film producer Lily trades her New York career and lands a job as a reporter in Bend, Oregon. Getting over her initial culture shock, the first part of the book focuses on her adjustment from animal loving, gun fearing environmentalist to integrating into life in the West where loving animals, fearing guns and caring for the environment mean some very different things. As Lily watches the transformation of Bend take place before her eyes as people immigrate into the area and transform it, she decides to learn all she can by immersing herself into what life in Bend was like before she arrived. Her desire was driven by interviews of Bend citizens- hunters, loggers, and other very ordinary folks.

After learning to flyfish from boyfriend-turned-husband Scott she decides to do the seemingly radical thing given her lifelong thoughts about such things- she decides to get in touch with what's on her plate. She decides to learn how to hunt.

The rest of the book focuses on several episodes where she does all the things we hunters do- except from the standpoint of a total outsider. It reveals something about us- how inhospitable we can be to people and how much navel gazing the hunting and shooting community actually engages in. It also reveals the excellent efforts of some of our community to make hunting approachable for those who didn't grow up in a hunting family or in a hunting community. I had never considered it so much previously, but hunting is a tough subject to approach as an adult new to the sport and it makes my meager efforts to that effort all that more important.

One of the most refreshing things about the book is seeing how the hunting and fishing community is viewed by those outside it and considering some of the valid criticisms those outside (and some inside) our community have of us. Coming from one of the "reddest" spots on the map in one of the "reddest" States in the Union- seeing how hunting and fishing provides common ground for people on both sides of the political spectrum is probably the best part of the book, and one of the most rewarding, since hunting isn't a liberal or conservative issue- it's a human issue.  Refreshing in our increasingly polarized society.

While all of the books I've reviewed mentioned in the article were worthwhile I probably enjoyed this one the most (I still haven't completed Tovar's) but I enjoyed it precisely because it came from such a different viewpoint than any I have. Let me illustrate- I loved Rinella's books, but it could have been written from the viewpoint of any number of my hunting companions. Not to take anything from Mr. Rinella- but he didn't write anything that I found shocking or describe familiar things in unusual ways. For me, reading Rinella is like a favorite pair of jeans- comfortable in it's familiarity. I ended up feeling like I could have been on a hunt with Rinella or could go on one next week. Georgia Pellegrini's work on the other hand was somewhat exotic- hunts among the very well heeled and politically connected, British estates, huge corporate ranches, that kind of thing. In short, I found her work unapproachable- so foreign to my experience that I had a hard time connecting to it.

Lily Raff McCaulou approached what I love and know- Western hunting and conservation- from precisely the opposite angle I have. She describes something so familiar to me from such a different perspective that I found it simply fascinating and much more than being merely entertained- I learned some things among the backdrop of gun shops, fly fishing and elk hunts.

So the next time you find yourself in a book store or cruising Amazon looking for something new- you could do a lot worse than Lily raft McCaulou and The Call of the Mild.