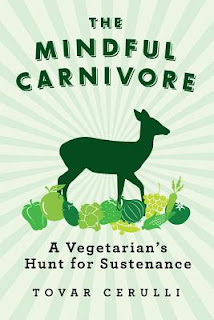 In the long winter months I like to pass days that are too cold or windy to venture out much by reading hunting literature. I must confess that most modern hunting literature doesn't do much for me since so much of it centers around trophy hunting or exotica that I have a hard time relating too as someone primarily focused on hunting for the table. As subsistence hunting becomes more unusual, the amount of literature written in that genre gets smaller and smaller. As a partial response to that I turned largely to blogs, where I could interact with some of the authors and find some material that might never make it into print otherwise. Occasionally, one of those author's material makes it into print.

I first ran across Tovar back on Holly Heyser's (sadly now defunct) blog Norcal Cazadora where he was a frequent commenter. Much of the content on Holly's blog centered on the ethos of hunting and killing game and many of the readers were not hunters and the content there was not your average hunting blog by any stretch of the imagination. I followed Tovar's comments from there to his own blog and was delighted to hear he was working on a book. Time, being what it is, moved on and I lost touch with Tovar's work among many others but was delighted when I ran across him on SBW's Facebook page. I was pleased to see the book was finished and even more pleased when Tovar agreed to forward me a copy to review for my readers.

In summary, for those of you unfamiliar with Mr. Cerulli, is basically the story of a vegan turned hunter. He is a wonderful story teller and the book is basically the inner voyage he makes from typical American eater and angler as a teen to a vegetarian in his twenties to sick middle aged man. His doctor suggested he needed more protein in his diet and in one of the most poignant lines in the book, "she didn't mean more tofu."

Faced with a dilemma of needing to include animal protein in his diet but being leery of readily available industrial farmed meat products commonly available- his attention turned to hunting. The reader is taken through the entire process in Tovar's mind- how someone so intent to cause no harm in their existence comes to see that everything we eat has consequences intended or not and how when faced with what is ultimately a requirement to become a carnivore- hunting becomes the path of least harm and highest awareness of what actually goes on your plate.

Centered entirely on the East Coast of the US, most of the hunting action centers on whitetail deer and small game. Tovar presents some great information about the history of hunting in early American history and tells the story of deer and deer hunting very well. It also tells the story of some of the people in Tovar's life and weaves a rich tapestry of how those people contributed to his journey from boy to vegan to hunter. In reading the book, I was reminded that none of us become hunters on our own- it is through a mentor (or several) that we achieve that status and the conservation of game is a community wide endeavor. While I have an interest in hunting solo, that is really a misnomer- none of us are solo hunters- it is the efforts and contributions of many who make it possible to be hunters.

One of the better segments of the book is toward the end where Tovar takes us on a series of unsuccessful hunts before finally taking his first deer. It is a great representation of what goes through our minds when we are learning to hunt a new species and how hard we can work at hunting to no avail. I've long been critical of the common notion among non hunters that hunting is easy and frequently successful and this narrative disputes that perfectly.

I enjoyed the book a great deal. Mr. Cerulli asks hard questions and brings an unflinching look at what is on your plate. For the reader tired of another "whitetail story" or perhaps is uncomfortable with what place hunting has in our food supply- this book is recommended. For new hunters or people exploring the notion of hunting as an ethical way to obtain food- it should be required reading. I really hope that Tovar is hard at work on a second book because I would certainly like to read about more of his story.
Posted by hodgeman at 6:22 PM