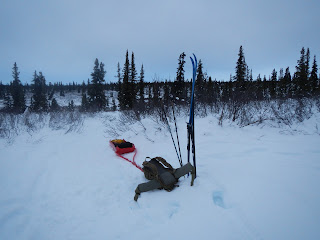 I spent a wonderful New Year's Day doing what I love to do the most- spending time outdoors hunting. I was hunting in a manner that some may consider unusual, on skis. The Europeans, particularly the Nordic countries, have a rich tradition of hunting from skis and that activity when performed with a rifle is the beginning of the Olympic sport Biathlon.

In the US however, we have no such traditions even in areas with substantial snow. In Alaska, the Natives have no tradition of skis but rather with snowshoes which most Americans consider a more practical application for a hunter. Most of this is pretty academic at any rate since the modern Alaskan is more apt to be riding a snowmobile than striding around on either.

Resources on cross country skiing are everywhere on the Internet but articles on hunting from them are not particularly common. As motorized backcountry travel becomes more restricted in many parts of the US and a lot of hunters pinched by the strain of the down economy are looking for a more economical method of backcountry winter travel. So whether by legislation or finance- skis are starting to look like a more attractive option for a lot of hunters. What I've endeavored to do here is just assemble some basic information as a starting place for hunters interested in utilizing skis rather than an exhaustive resource which is well beyond the scope of this blog.

First off, you'll need some skis. While the neophyte would assume that any simple XC ski would do- you'd be surprised at how much specialization has crept into the industry in the last few years. For the hunter, who'll be often forging across untracked snow or navigating frozen river corridors, you need to avoid the typical "track ski" made for groomed trails common in city parks and golf courses wherever snow blankets the ground. What the hunter needs is a wider ski to float better and something with metal edges to gain a lateral groove on glare ice or a windblown frozen river surface. Every maker of XC skis offers something that works under the moniker "Backcountry". As a practical caveat- consider slightly longer skis than you'd normally use since you'll also have equipment and a rifle to add to your body weight that the maker's chart doesn't account for. Much is said about waxless and waxable skis- there are advantages to both depending on where you live and the snow conditions typical to your area so some research on your part will be required to pick the best application. I have both and typically use waxable skis although I'm something of a minority on that point.

To lash those skis to your feet you'll need boots and bindings. Most of the track skis are equipped with tennis shoe-like low boots more suited to racing and the bindings are often too delicate for the rigors of backcountry use since they're most often used, literally, for a "walk in the park". A backcountry boot is heavier, taller and more robust to hold up under more strenuous conditions. The bindings are more robust as well, falling something between standard 'NNN' and telemark bindings. These are mostly found under the trade name 'BCN'. As a practical matter- fit is crucial so take some time and make sure the boots have the best fit possible- you'll regret it if you don't. For the beginner- reliance on knowledgable staff at a local retailer is likely a better choice than just picking components off a website.

To round out the package for skis, you'll need some poles. Just about any solid ski touring type pole will work fine and there's little magic to the pole with one caveat...buy it a bit longer than you would for track skiing to account for the additional powder you'll have and steeper grades you may encounter.

Since hunting generally involves more gear than you'd commonly need for a day ski, some sort of back pack is in order. Not only to use to carry some equipment, but to also serve to attach a pulk too. More on that later, but a backpack should have some form of light frame panel and have a waist belt and sternum strap. Lashing loops to attach carabiners or some other attaching mechanism for the pulk poles is essential and many packs come so equipped, so look at what you already have. I have a great admiration for the Mystery Ranch line of packs and they've performed exceptionally in the role of pulk harness. In fact, mine have performed better than a dedicated pulk harness I had some years ago. Don't worry about the capacity of the pack much since the bulk of the gear is going into the pulk. I like to keep some miscellaneous articles in mine, particularly water since it resists freezing longer due to body heat coming through the pack.

The pulk is likely the most unique piece of gear since it's somewhat specialized. Millions of people XC ski in the US, but relatively few do any significant backcountry touring. Finding a commercial pulk is somewhat difficult and even those who manufacture them may only do so on an intermittent basis. There are a few out there as well as several excellent resources on the web to adapt a commercial plastic sled into a dedicated ski pulk. My first pulk was an adapted Paris freight sled and it gave excellent service and my current model is a Northern Sled Works ski pulk made from heavy duty HDPE.  As a word of advice- if you make your own, consider carefully the poles that you'll use to pull the pulk. They must be rigid enough to stop the sled and prevent it from running into your legs from behind and they must be flexible enough to not injure you when you inevitably fall onto them. As another consideration, the pole material must be flexible at cold temperatures- fiberglass and HDPE have much to recommend.

That is the basics of the equipment you'll need- nothing fancy but durable should be a consideration since having something fall apart several miles in the backcountry with a couple of hundred pounds of venison wouldn't be the start of what should be a good day. Even though it may seem like a lot of gear- it isn't. With minimal care, a set of XC skis will last decades so think of it as an investment rather than something you can upgrade next season. My frequent hunting partner uses a set of skis he purchased about the time I was born and they've suffered wear better than I have. A top quality set of new equipment costs about $500 and spread over 30 years doesn't look like a bad deal at all. If you're feeling the pinch financially, used gear- given it's durability and wide availability as well as the enthusiast's knack for constantly upgrading functional equipment- is widely available. There are likely three pairs of skis in America for every XC skier so finding them won't be an issue- your bigger challenge will be finding appropriate backcountry gear but it is out there. You may have to haunt used sporting goods stores for a few months but you can likely assemble a usable set-up for less than $100.

You can move quite a load in that type of setup- I've hauled 125 pounds on my pulk without any issues and more weight wouldn't have been particularly detrimental. Do be careful and realize that downhill will be worse if the load starts to push you, particularly when that downhill trail goes around a corner. I know from experience...scars to prove it. It takes a bit of practice, but hauling loads on the pulk is far more efficient than on a backpack in summer conditions and many places that would be a day long slog over spongy tundra in summer are but an hour's ski during winter months.

The rest of the techniques are pretty standard for anyone experienced with cold weather hunting. I've actually found I enjoy hunting on skis because the amount of equipment I can carry on the pulk is much greater and more comfortable than I can carry on my back. While a caribou may take 2, 3 or even 4 loads to haul out in a backpack- even the biggest bull can be broken down and hauled out in a single load on the pulk in all but the steepest terrain. As a consideration, a carbine type rifle was born for this type of hunting. A full size rifle is a real pain to carry slung and use with ski poles but the short barreled carbine rides nicely and, unless you're a very small framed person, will be tucked behind your back and out of the way. My Steyr Scout performs admirably in this function but any light carbine with a short barrel will work as well. With a standard length rifle I have no choice but to leave it in the sled.

So there you go- the basics of hunting from cross country ski equipment. For those with appropriate snow cover during hunting season I believe you'll find the speed and silence the skis afford as well as the load hauling capability are a real asset to the cold country hunter. Good luck!
Here is a clip form my GoPro Hero2 during a recent ski hunt...no action but it gives you an idea of the speed and silence skis are capable of.